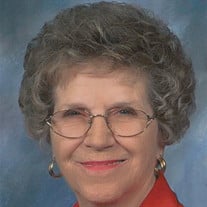 A celebration of the life of Marilyn Shelton Rabbitt will be held at 1 p.m. Friday, March 10 in the sanctuary of the First United Methodist Church. Marilyn passed away Saturday, March 4 following a brief illness. She was born December 13, 1932 in Okmulgee, the youngest of Rogers J. and Iva D. (Lawson) Shelton’s three children. She attended Wilson and Roosevelt Elementary Schools and graduated from Okmulgee High School with the Class of 1950. While in school she was a dance student of Phi Delta Neal. Following graduation, she attended Oklahoma A&M College and majored in Business. After a brief stay in South Texas, she returned to Okmulgee and worked as an operator at Southwestern Bell, a secretary for Roy Belford in the Commercial Arts Department at Oklahoma State Tech, person¬nel director at Okmulgee Hospital, and a secretary at both Horace Mann and Emerson Elementary Schools. On March 1, 1956 she married C. Bernard Rabbitt, Jr. They had two children: Kay Lynn and E. Bernard. In 1971, the family moved to Muskogee where Marilyn worked as secretary to one of the assistant superintendents of Muskogee Public Schools. In late 1978, the family returned to Okmulgee, and Marilyn began working as secretary to Ray Thomason at the Okmulgee Board of Education. Shortly thereafter, she became executive secretary to the superintendent of schools and remained in that position until she retired. She returned to the Board of Education at the request of then-superintendent Paul McGee and worked briefly before retir¬ing again. She was a life-long member of the First United Methodist Church and served on numerous com¬mittees. She is also a member of the United Methodist Women. She has been a member of Salvation Army Board of Directors for more than 20 years, is a former member of the Sesame Club, and the Business and Professional Women’s Club. She served as a leader of her daughter’s Brownie troop. She was preceded in death by her husband Bernard, her sister Evelyn Morgan, her brother Robert Shelton, her son-in-law Lee Brower, and a niece Sharon Arnwine. She is survived by her daughter Kay Rabbitt-Brower, of the home, her son Bernard and his wife Kim of Noble, OK, five grandchildren, Amanda Brower of Cleveland, OK, Deavon Jester and wife Kassie and Brandon Rabbitt of Noble, OK, W. Bernard Rabbitt of Moore, OK, and Stacy Cheney and husband Josh, of Haskell, OK. Four great-grandchildren, Rylan and Rucker Jester of Noble, Chloe and Mackenzie Cheney of Haskell, and a third great-granddaughter due in May. Pallbearers are E. Bernard Rabbitt, Deavon Jester, W. Bernard Rabbitt, Brandon Rabbitt, Josh Cheney, and Bill Nygard. Honorary pallbearers are Scott Rabbitt, Bill Holcomb, and Bill Martin. The family requests donations in Marilyn’s name be made to the First United Methodist Church. Arrangements have been entrusted to McClendon-Winters Funeral Home.

A celebration of the life of Marilyn Shelton Rabbitt will be held at 1 p.m. Friday, March 10 in the sanctuary of the First United Methodist Church. Marilyn passed away Saturday, March 4 following a brief illness. She was born December 13,... View Obituary & Service Information

The family of Marilyn Rabbitt created this Life Tributes page to make it easy to share your memories.

A celebration of the life of Marilyn Shelton Rabbitt will be...