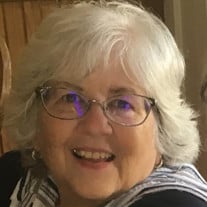 Margaret Ann (Chick) Branson, a resident of Gillette, Wyoming passed from this life on Friday, November 13, 2020 at the age of 69 after a two-year battle with cancer. Margaret was born in Okmulgee on June 14, 1951 to the late Wayne Elmer Burd and Dorothy B. Duke Burd. She married James Branson on November 23, 1977 and in 1980 they moved to Gillette, Wyoming. Margaret worked in the coal industry as the head of logistics for Cloud Park/Kennecott Energy; She retired in 2017 after 35 years in the coal industry. Chick enjoyed barrel racing and being outdoors with her horses. She also loved fishing, and especially enjoyed fishing with Jim and her family in Canada and Alaska. Margaret was a master quilter and was a member of the Wyoming Quilters Guild and was an Eleanor Burns Quilting Instructor. Margaret is survived by her husband Jim of 42 years, brothers Larry Wayne Burd of Wichita, Kansas, and Dr. Ray E. Burd and wife Jan of Lavaca, Arkansas; sister-in-law Carol Lee and her husband Merlin of Claremore, OK. She is also survived by three nieces; Jennifer Johnson of Birmingham, Alabama; Casey Ann Burd of Springdale, Arkansas; and Dr. Lindsey Erby and her husband James of Fayetteville, Arkansas. Margaret is also survived by her favorite nephew Kelsey Wayne Burd and wife Caroline of Fayetteville, Arkansas. In addition, Margaret was thrilled to be the Great Aunt Chick of seven great nieces and nephews: Katherine Stewart, Ryan Johnson, Maddie Kay Johnson, Isaac Houston, Ned Burd, Nash Erby, and her namesake Margaret Burd. Viewing will be at McClendon-Winters Funeral Home from 9:00 a.m until 11:30 a.m on Saturday, November 21, followed by a graveside service at 1:00 p.m at Okmulgee Cemetery. In lieu of flowers, the family is requesting contributions to the American Cancer Society, P.O 22478, Oklahoma City, OK 73123. The Tribute Video and Funeral Service may be viewed on Margaret’s Tribute Page at www.mcclendon-winters.com. Memories, condolences, photos and videos may be shared with the family on this page as well. Arrangements have been entrusted to the McClendon-Winters Funeral Home of Okmulgee.

Margaret Ann (Chick) Branson, a resident of Gillette, Wyoming passed from this life on Friday, November 13, 2020 at the age of 69 after a two-year battle with cancer. Margaret was born in Okmulgee on June 14, 1951 to the late Wayne Elmer Burd... View Obituary & Service Information

The family of Margaret Ann Branson created this Life Tributes page to make it easy to share your memories.