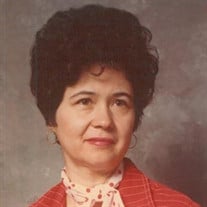 Lydia Jane (Janie) Rains Miller went to be with her Lord and Savior, Jesus Christ, on March 3, 2021 at the age of 89 years and 3 days in Tulsa, Oklahoma. Jane was a true servant of God. She served as church pianist at First Baptist Church in both Morris and Beggs, and taught Sunday School in every church that she attended until her low vision prevented her from teaching. She loved reading and studying the Bible. She liked to write down scriptures on index cards and give them to people and she had special prayer cards written down to give to anyone who needed one. For many years she loved gardening, cooking, and traveling. But her favorite thing to do was to be with and take care of her family. She dearly loved her husband, children, and grandchildren. Lydia Jane (Janie) Rains Miller was born on February 28, 1932 in Hitchita, Oklahoma. She lived there all her life until she went to college at Oklahoma A&M in Stillwater, Oklahoma, where she met the love of her life, Senator Robert Lee (Bob) Miller, whom she married on Bob’s birthday, September 16, 1952 in Muskogee, Oklahoma. She was asked at her wedding shower, which beau did she pick, the one with the airplane or the one with the horse trailer and she responded, the one with the horse trailer (her cowboy). Her future mother-in-law got a real kick out of that. After getting married, they went on to have two daughters, Linda Kathryn Enlow and Lea Ann Nix and she ultimately finished her education at Northeastern State University in Tahlequah, Oklahoma. She taught English and Communications at Oklahoma State Tech in Okmulgee, OK for 24 years, retiring in 1989. She and Bob were married for almost 67 years until his death in 2019. Jane is survived by her two daughters, Lea Ann Nix of the home and Linda Kathryn Enlow and husband, Dewey of Sapulpa, OK; six grandchildren, Crystal Jane Rogers and husband Barrett of Stafford, VA, Robert Stephen Nix of Chickasha, OK, Matthew West Nix of the home, Josh Enlow and wife, Julie of Sapulpa, OK, Jolynn Jeter and husband David of Ramona, OK, JanEtte Oakley and husband Brody of Cashion, OK; fourteen great-grandchildren, Haylee Ann Marie Rogers and Caitlyn Shea Rogers of Stafford, VA, Dayson West Nix of the home, Halle Michelle Nix of Glenpool, OK, Ezra Jane Nix of Ft. Smith, AR, Alexis, Leo, Allie, and Ainsley Enlow of Sapulpa, OK, Lea and Declan Jeter of Ramona, OK, Caroline, Zane and Rex Oakley of Cashion, OK as well as a host of nieces and nephews and numerous friends. She was preceded in death by her husband, Senator Robert Lee (Bob) Miller, and her parents, William Fred and Cora Kathryn (Wells) Rains. Services will be at First Baptist Church in Morris, OK on Tuesday, March 9, 2021 at 1 p.m. Viewing will be at McClendon-Winters Funeral Home Chapel on Monday, March 8, 2021 from 1-8 pm with family visitation from 6-8 pm. Interment will follow at the Miller Ranch Cemetery in Okmulgee, Oklahoma. Casketbearers will be Jody Stamper, Jody Wadley, Roy King, Jack Crenshaw, David Miller, John Miller, and Mark Miller. Honorary casketbearers will be Dewey Enlow, Larry Nix, Robert Nix, and Matthew Nix. Arrangements have been entrusted to the McClendon-Winters Funeral Home of Okmulgee.

Lydia Jane (Janie) Rains Miller went to be with her Lord and Savior, Jesus Christ, on March 3, 2021 at the age of 89 years and 3 days in Tulsa, Oklahoma. Jane was a true servant of God. She served as church pianist at First Baptist Church... View Obituary & Service Information

The family of Lydia Jane Miller created this Life Tributes page to make it easy to share your memories.

Lydia Jane (Janie) Rains Miller went to be with her Lord and...