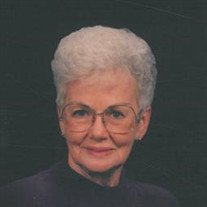 Luella Holly Bennight, was born in St. Louis, Missouri to Marlin and Lola (Yates) Holly on December 10, 1928. She was the eldest of six children. Luella passed away August 10, 2021, at her residence in Okmulgee. Luella grew up in Henryetta, OK and attended school and graduated from Henryetta High School. She later married Joe D. Bennight and moved to Okmulgee where she raised her family. She was a long-standing member of Second Baptist Church where she was very active during her younger years. After her children grew up, Luella went to cosmetology school where she became a hairdresser. She worked at Betty’s Kut and Kurl until her retirement. She enjoyed doing crafts. Luella was described as a “spit-fire” by her family. They said she was always doing or going somewhere. Luella was preceded in death by her parents Marlin and Lola Holly, stepmother Jewel Holly, her late husband Joe. D. Bennight, daughters Toni L. Bickel, grandson Justin Bennight and a sister Marlene Murray. Luella is survived by her son Robert Bennight; daughter Pamela Jo Bennight of Okmulgee, sisters Bobby Carpenter of Broken Arrow, Barbara Ullrich of Oklahoma City, Virginia and husband Bobby Russell of Enid, brother Dick Holly of Okmulgee, grandchildren Chris Thomas, Joseph Bickel, and great-grandchildren Dalynn Thomas, Christopher Thomas, and Gabriel Thomas. Friends and family may visit the funeral home on Sunday, August 15, 2021, from, 2:00 P.M. to 6:00 P.M. Graveside services will be held on Monday, August 16, 2021, at 11:00 at Westlawn Cemetery in Henryetta, OK. The casket will be open following the service. Arrangements have been entrusted to the McClendon-Winters Funeral Home of Okmulgee. Memories, condolences, photos and videos may be shared with the family on Luella’s Tribute Page of our website at www.mcclendon-witers.com

Luella Holly Bennight, was born in St. Louis, Missouri to Marlin and Lola (Yates) Holly on December 10, 1928. She was the eldest of six children. Luella passed away August 10, 2021, at her residence in Okmulgee. Luella grew up in Henryetta,... View Obituary & Service Information

The family of Luella Holly Bennight created this Life Tributes page to make it easy to share your memories.