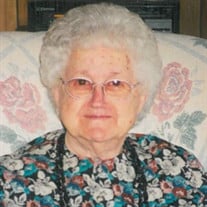 Lucille Ida Weaver was born July 26, 1920, at Okemah, OK to Luther E. and Rosie Nell (Fisher) Garrett. She passed away peacefully at her home on March 24, 2022 at the age of 101. She married her husband, Alva “Cleo” Weaver, March 14, 1940. They were married 62 years. Mrs. Weaver was employed by Okmulgee Memorial Hospital in environmental service and retired in 1982. She was a member of the Eram Baptist Church and Sunday school teacher of the women’s class until she was unable to attend due to her health. Mrs. Weaver was an excellent seamstress and enjoyed sewing and making western apparel for her family and friends. She loved working in her yard and garden. After her husband’s retirement they became members of the Oklahoma Wagon Racers and took their wagon and team of horses on many trail rides and parades in Oklahoma, Arkansas, Kansas, and Missouri. Mrs. Weaver was preceded in death by her husband and parents; one daughter, Shirley Johnston; stepdaughter, Gertie Ruth Bell, and stepson, Robert Weaver; four brothers, Grady Garrett, Lee Garrett, Cleo Garrett, and Jack Garrett; four sisters, Leona Garrett, Bessie Johnston, Beatrice Ramberg, and Gladys Mitchell. She is survived by her daughter, Mary Gehle and husband Duane of Boynton, OK; six grandchildren, Jim Gehle and wife Beth, Webbers Falls; Debbie Gehle, Okmulgee; Robert Gehle and wife Jessica, Hectorville; Rick McDaniel and wife Lynn, Arizona; Rita Zumwalt and husband Devin, Arizona; Russell McDaniel and wife Martha, California; Ten great-grandchildren; and many great-great grandchildren. Step grandchildren, Toni Weaver and husband Scott Swearingen; Juli Amant and husband Glen. Many nieces and nephews. Visitation will be from 12:00 P.M. - 7:00 P.M. with family visitation from 5:00 P.M - 7:00 P.M. on Wednesday, March 30 at McClendon-Winters Chapel. Funeral Services will be 11:00 A.M. Thursday, March 31, 2022 at the McClendon-Winters Funeral Home Chapel with Pastor Shane Weaver officiating Interment will follow at the Morris Cemetery in Morris, Oklahoma. Arrangements have been entrusted to the McClendon-Winters Funeral Home of Okmulgee. Memories, condolences, photos and videos may be shared with the family on Lucille’s Tribute Page of our website at www.mcclendon-winters.com

The family of Lucille Ida Weaver created this Life Tributes page to make it easy to share your memories.