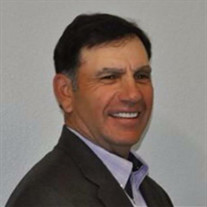 Louis Joseph Costanza entered the arena of life on Monday, February 26, 1945 in Amite, Louisiana to the late Phillip and Lucy (Ruffino) Costanza. He entered the herd of Heaven on Wednesday, March 14, 2018 at his home in Okmulgee surrounded by his family. Louis was drafted into the Army during the Vietnam War and was discharged at the age of 22. He came from Louisiana to attended horse shoeing school in Sperry, Oklahoma. He later met the love of his life Cindy Huckabee during a horse show at the Tulsa State Fair and they married on June 18, 1971 in Broken Arrow. His love of horses led him to begin training for Harold Hudspeth. He then began his own training business in 1971 which included many champions in halter, reining, roping, barrel, and cutting. But later only focused on training cutters, while also raising World Champion quarter horses. He could get a horse broke like no other and was known for his work ethic and knowledge of the industry. In his spare time he went fishing and enjoyed playing cards with his grandchildren. Louis also enjoyed going to horse sales and watching the Barrett-Jackson car sales on TV. His all time favorite movie was Lonesome Dove and he could quote the whole movie and expected you to be able as well. Louis also was a member of AQHA and NCHA. Preceding Louis in death are his parents. Left to cherish all of the wonderful memories of Louis is his wife Cindy of 46 years, daughter Malissa Costanza-Tittle, son Brian Costanza and wife Terry, Mark Tittle, grandchildren Mason Cole Tittle, Avery Ann Tittle, Nicholas Joseph Costanza, Andrew Louis Costanza, sisters Virginia Fisher, Laura Costanza, and Mary Perrin and husband Iggy, brother Sonny Costanza and wife Lynette, sister-in-law Sharon Roach and husband Kenny, brother-in-law Patrick Huckabee and wife Rhonda, and a host of other in-laws, nieces, nephews, and cousins. He also had more friends than he could count. A funeral service for Louis will be held 1:00 P.M. Tuesday, March 20, 2018 at Crossroads Baptist Church in Beggs, Oklahoma. Interment will follow at the Morris Cemetery. Friends may visit the funeral home on Monday, March 19 from 1:00 P.M. until 8:00 P.M. A Rosary service will be held 7:00 P.M. Monday, March 19 at the McClendon-Winters Funeral Home in Okmulgee. Arrangements have been entrusted to the McClendon-Winters Funeral Home of Okmulgee.

Louis Joseph Costanza entered the arena of life on Monday, February 26, 1945 in Amite, Louisiana to the late Phillip and Lucy (Ruffino) Costanza. He entered the herd of Heaven on Wednesday, March 14, 2018 at his home in Okmulgee surrounded by... View Obituary & Service Information

The family of Louis Joseph Costanza created this Life Tributes page to make it easy to share your memories.