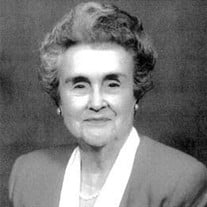 A funeral service for Mrs. Lois Christian Alexander will be held 12:00 p.m. , Monday, June 13, 2016 at the McClendon-Winters Funeral Home Chapel in Okmulgee with Reverend Roland Youngberg officiating. Interment will follow at the Okmulgee Cemetery. Casketbearers will be Bill Rhoades, Scott Rhoades, John Rhoades, Stephen Rhoades, Kevin Adkins and Elizabeth Adkins. Friends may visit the funeral home on Sunday from 1:00 p.m. - 6:00 p.m. Memorial contributions may be made to the Right Path Riding Academy, 16620 Old Shamrock Hwy, Drumright, OK 74030. Mrs. Alexander passed away June 9, 2016 at Rebold Manor at 102 years of age. She was preceded in death by her parents, husbands, Marshall Carnell and A.P. Alexander, a brother, and a son, Stephen Rhoades IV. Survivors include her son, William Rhoades of Plano, Texas, three grandsons, Scott Rhoades of Richardson, Texas, John Rhoades and Stephen Rhoades, both of Seattle, Washington, and a granddaughter, Elizabeth Adkins of Coppell, Texas. Mrs. Alexander came from a family of early settlers, who moved to Northeastern area of Oklahoma Territory in the years just prior to statehood in 1907. She was born August 3, 1913 in Okmulgee to the late Burt Walton and Mary (Bozarth) Christian. Her father owned one of the first drug stores in Okmulgee, and later, was a successful oilman. Her mother was a writer, news correspondent and an educator, and was the first Principal of Okmulgee High School. Maternal grandfather, Jacob Bozarth, was a district judge in Okmulgee County and donated the land on which Okmulgee High School was built. Mrs. Alexander attended public schools in Okmulgee and graduated from Okmulgee High School. She graduated from William Woods University with an Associate Degree in Fine Arts in 1933. Afterward, she attended the University of Alabama and the University of Oklahoma where she studied creative writing and novel structure. She retired from the Security National Bank in Norman in 1978 after working 30 years in banking, both in Norman and Okmulgee. Lois was an accomplished author, having published her first romantic novel at age 60. Since that time, she wrote 15 romantic and suspense novels for the United States market, including a Harlequin American published also in seven foreign countries. One of her best known works, “Over Horizon”, made Walden books best-seller list. Four of her novels were co-authored with the accomplished author, Sandra Dark, under the names of Kaye Walton and Karen Rhodes. She was also the author of numerous children’s and adult’s short stories, plays, greeting card verses, sonnets and poetry. Mrs. Alexander was also recognized in the Who’s Who of American Women, was a member and past-president of the National League of American Penwomen, member and past president of the Norman Writer’s Galaxy, she was co-founder of the Central Oklahoma Romance Association, member of the Society of Children’s Book Writers, member of the Oklahoma Writer’s Federation, and member of the Oklahoma for the Romance Writers of America. She served as a member of the William Woods College English Advisory Board from 1990-1992 and a 1993 Recipient of the William Woods Distinguished Alumnae Award. Funeral arrangements have been entrusted to the McClendon-Winters Funeral Home of Okmulgee. Memories, condolences, photos and videos may be shared with the family on Mrs. Alexander’s Tribute Page of our website at www.mcclendon-winters.com

The family of Lois Christian Alexander created this Life Tributes page to make it easy to share your memories.

A funeral service for Mrs. Lois Christian Alexander will be held...