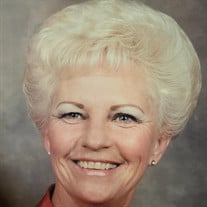 On July 4th 1942, the firecracker to become known as Linda Louise Kellogg was born in Okmulgee County to John L and Ethel Mae McElhannon. On August 16th, 1958 Seth Kellogg Sr. swept her off her feet to holy matrimony. Soon, off to Dallas they journeyed where their son Seth Jr. would be born. A few years later they returned home to Okmulgee before their daughter Tammy came along. Linda Lou was known by many as the "Keeper of all things financial " in the business that was carried on by her and Seth Jr. after Seth Sr.'s untimely and young death. In that position Linda was respected by many, accepted by most, but normally despised by anyone that didn't pay their debts they had promised her. Her son Seth told her near her end, that he had changed his mind, he didn't wanna run it with out her ... but she chuckled and said "Oh well". Linda's grit and determination got her through more than one form of cancer. Then sixty years of smokin' cigarettes brought COPD and CHF into the picture. Those medical conditions didn't win without a fight from her!! During one of the last hospitalizations she asked her son how long he thought she had to live. He acknowledged he didn't know, but jus' didn't want her suffering. At 77 years old, and having successfully worked hard all her life, Linda said "I don't wanna be a QUITTER... but if I gotta SUFFER let's git to sufferin' ... cuzz this ain't gittin' it." In spite of her medical challenges Linda's independent streak allowed her to live in her own home with the cooperation of her son and the loving assistance of a lady that came to be a Godsend, Pam Maxwell. Linda's life was definitely enhanced and extended by her daughter Tammy Wade's extreme medical knowledge, especially of all things Sodium, to keep the fluid retention down due to the COPD and CHF. Yes it "Took a village" ... but I believe we all think she was worthy of our joint efforts to keep her comfortable in her home till Jason and Braden Winters and of Winters' Funeral Services rolled her out on a bright Easter Sunday afternoon. Linda wanted to donate her body to science but acquiesced to traditional embalming so as to assist her friends and loved ones in closure. Linda Lou was predeceased by both parents and her husband Seth Kellogg Sr. She leaves to cherish her memories her daughter Tammy and husband Dennis Wade. Son Seth and wife Lesa Kellogg. Siblings Kathryn Fulton, Mary Lois and George Harding, brother Dwayne and Connie McElhannon. Grandchildren Brandy Wade, Lindsay and Jason Welton, their children (great grandchildren) Fin, Keith, Patrick, Kenny, Katie and David. Grandchildren Kelsey Kellogg, Shaun and Jill Raley, their children (great grandchildren) Sierra Lyn, Zane Michael, Piper Grace. The Kellogg's wish to thank Becky Hair of May's Healthcare and the staff of New Century Hospice for all their attentive care. Seth wants to personally thank Linda's siblings for being such a large support for her journey. Word of remembrance can be viewed online at https://www.mcclendon-winters.com/obituaries/Linda-Kellogg/#!/PhotosVideos Friends may visit the funeral home for viewing on Friday, April 17, 2020 from 12:00 P.M. – 8:00 P.M. There will be a private family interment at Westlawn Cemetery. Memories, condolences, photos and videos may also be shared with the family on Linda's Tribute Page of our website at www.mcclendon-winters.com Arrangements have been entrusted to the McClendon-Winters Funeral Home of Okmulgee.

On July 4th 1942, the firecracker to become known as Linda Louise Kellogg was born in Okmulgee County to John L and Ethel Mae McElhannon. On August 16th, 1958 Seth Kellogg Sr. swept her off her feet to holy matrimony. Soon, off to Dallas they... View Obituary & Service Information

The family of Linda Louise Kellogg created this Life Tributes page to make it easy to share your memories.

On July 4th 1942, the firecracker to become known as Linda Louise...