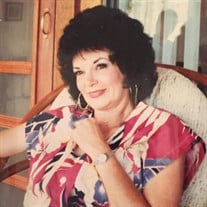 Linda C. Corn, a resident of Okmulgee passed on January 24,2021 at the age of 77 in Henryetta, Oklahoma. She was born to the late Herbert and Twylla (Luce) May on October 27, 1943 in Shreveport, Louisiana. Shortly after her family moved to Texas, where she spent a large part of her childhood. Her family moved to Artesia, New Mexico where she spent the last few years of high school and her graduation. Linda met and later married Steve Corn in December of 1986. Linda worked as managerial bookkeeper over the years until she retired. She and Steve moved to Okmulgee in 2013. She was able to travel with Steve while he drove his truck across the continental United States. In her leisurely time, she liked spending time at the lake, crafting floral arrangements, shopping for all things “sparkly”, spending time with her family and especially her sweet Yorkie Romeo. Linda is preceded in death by her parents Herbert and Twylla. She is survived by her husband Steve, of the home, son Bobby and wife Pam McMillin of Willis, TX; daughter Tina and husband James Beard of Morris, OK; son Steven and wife Ashley Corn of Henryetta, OK; daughter Alyssa Adewumi of Bismarck, ND, grandchildren Sawyer and Austin McMillin of Houston, TX; Jared. Brett and Matt Beard of Morris, OK; Rylie, Saige, Rex Corn of Henryetta, OK; Malachi Corn, Aaliyah, Xander Brison, Keeva and Kaia Adewumi of North Dakota. Funeral services will be Wednesday, January 27, 2021 at 2:00 P.M. at the McClendon-Winters Funeral Home Chapel with Pastor Ryan Wells officiating. Friends may visit the funeral home Tuesday, January 26, 2021 from 1:00 P.M. to 8:00 P.M. Arrangements have been entrusted to the McClendon-Winters Funeral Home of Okmulgee. Memories, condolences, photos and videos may be shared with the family on Linda‘s Tribute Page of our website at www.mcclendon-winters.com

Linda C. Corn, a resident of Okmulgee passed on January 24,2021 at the age of 77 in Henryetta, Oklahoma. She was born to the late Herbert and Twylla (Luce) May on October 27, 1943 in Shreveport, Louisiana. Shortly after her family moved to Texas,... View Obituary & Service Information

The family of Linda Carole Corn created this Life Tributes page to make it easy to share your memories.