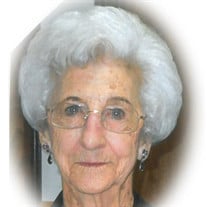 Lily Mae Kiser left her earthly home for her eternal home in heaven on Sunday, July 23, 2017, at the age of 90. Lily Mae was born to George Franklin and Trilby Josephine Davis on October 23, 1926. She was born in El Dorado, Arkansas, but lived most of her life in Okmulgee, Oklahoma. She graduated from Okmulgee High School in 1944. She held jobs at S.H. Kress, Newberry’s and the telephone company. Lily Mae married Gene Kiser on February 4, 1945 at the First Baptist Church of Okmulgee. Their first daughter, Barbara Jean, was born in 1946, and their second daughter, Carolyn Sue, was born in 1950. After the birth of her daughter Barbara, she became a full-time wife and mother. In 1961, Gene and Lily Mae built their house on North Griffin (where she still lived). Lily Mae has always served the Lord and Second Baptist Church. One of her greatest loves was singing in the choir and a ladies’ trio. For many years she faithfully visited the nursing homes and homebound church members. One of her other loves was fishing. She and Gene spent many hours fishing Okmulgee Lake; she from the bank and Gene from his boat. She passed this on to her daughters and grandchildren. Lily Mae loved and cared for her family. She was a true example of a virtuous woman in Proverbs 31. Lily Mae was preceded in death by her husband, Gene; her parents, one sister and two brothers. She is survived by her daughter, Barbara and Patrick Couch of Owasso, Oklahoma; her daughter, Carolyn and Jim Pappas of Yukon, Oklahoma; four grandchildren: Chris Couch, Shanna Stevens, Dusty Helms and Angela Herrin; thirteen great grandchildren and one great great granddaughter. She will be greatly missed by all who knew and loved her, but her legacy will live through her family and other lives she touched. Friends may visit the funeral home on Sunday from 1:00 P.M.-6:00 P.M. and the family will be present from 2:00 P.M.-4:00 P.M. for visitation. A celebration of Lily Mae’s life will be held 2:00 P.M., Monday, July 31, 2017 at the Second Baptist Church, 1003 N. Alabama, Okmulgee, Oklahoma. Interment will follow in the Okmulgee Cemetery. Casketbearers will be Patrick Couch, Jim Pappas, Chris Couch, Drake Stevens, Spencer Couch and Jeremy Herrin. In lieu of flowers, donations can be made to the Second Baptist Church, 1004 N. Alabama, Okmulgee, Oklahoma 74447. Arrangements have been entrusted to the McClendon-Winters Funeral Home of Okmulgee. Memories, condolences, photos and videos may be shared with the family on Lily Mae’s Tribute Page of our website at www.mcclendon-winters.com

Lily Mae Kiser left her earthly home for her eternal home in heaven on Sunday, July 23, 2017, at the age of 90. Lily Mae was born to George Franklin and Trilby Josephine Davis on October 23, 1926. She was born in El Dorado, Arkansas, but lived... View Obituary & Service Information

The family of Lily Mae Kiser created this Life Tributes page to make it easy to share your memories.

Lily Mae Kiser left her earthly home for her eternal home in...