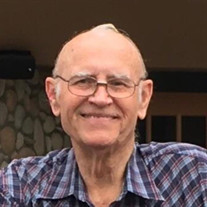 Leslie B. Love was born March 16, 1935 in Okmulgee to the late William Zeb and Hester Chester (Jones) Love. He passed away February 22, 2021 in Okmulgee at 85 years of age. Les was raised in Okmulgee and joined the National Guard and later the United States Air Force after graduating from Okmulgee High School. He worked for many years as a machinist and welder, and was known for being inventive. Les returned to Okmulgee from California in June of 2000. He loved music, whether he was writing songs, singing or playing one of his many instruments. Les was very active in church his entire life and was always there to greet everyone as the front door man. He was a member of Second Baptist Church at the time of his passing. He loved to share with others. Les will be remembered for being consistently gracious and for the love he had for his family. Les was preceded in death by his parents, wife, Mary Jo (Rider) Love, brothers, James Love, Johnny Love and Raymond Love and an infant child, Mark Lyn Love. Survivors include his son, Tim Love and wife Antje, grandchildren, Alanna and Taylor, his wife, Martha Love and her children and numerous grandchildren, brothers, Gene Love and Richard Love and wife Diana and sisters, Pearlene Jewell and Louise Patterson and husband Bill and numerous nieces and nephews. Friends may visit the funeral home one Wednesday, February 24, 2021 from 2:00 P.M. – 8:00 P.M. A funeral service will be held 10:00 A.M. Thursday, February 25, 2021 at the Second Baptist Church with Reverend Steve Gallagher officiating, assisted by Gene Love and Reverend Jerry Beck. Interment will follow in the Okmulgee Cemetery. Arrangements have been entrusted to the McClendon-Winters Funeral Home of Okmulgee. Memories, condolences, photos and videos may be shared with the family on Les‘ Tribute Page of our website at www.mcclendon-winters.com

Leslie B. Love was born March 16, 1935 in Okmulgee to the late William Zeb and Hester Chester (Jones) Love. He passed away February 22, 2021 in Okmulgee at 85 years of age. Les was raised in Okmulgee and joined the National Guard and later... View Obituary & Service Information

The family of Leslie B. Love created this Life Tributes page to make it easy to share your memories.