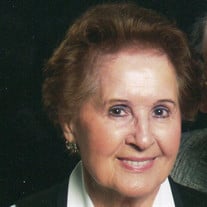 Leota Thomas Markham “Lea” was born on July 15, 1930 in Okmulgee, Oklahoma to Denny and Lula Thomas. The family already consisted of 4 children when Lea and her twin sister were born. Five years later, a set of twin boys would join the Thomas clan. Growing up one of eight children would be a big influence on Lea for the rest of her life. In 1948, Lea married Bobby Markham who had recently returned from serving in World War II. Their first daughter, Debi, was born the next year, followed by Jan two years later. Lea and Bobby were active members of First Baptist Church and much of their social life revolved around young couples like themselves with small children. Lea loved to share stories of this time of her life and considered it one of her favorites. Twelve years later, Lea and Bobby added third daughter, Susan, to the family. In 1972, Lea transitioned from a stay-at-home mom to a working woman taking a job as a secretary and bookkeeper at Leisure Manor and Rebold Manor. Lea had a passion for the elderly and loved forming relationships with the patients as well as working with the many families that she assisted. During this time, Lea became “MeMe” when her first grandchildren, Amy and Stuart, were born to daughter, Jan. Many trips were made to Tulsa to watch dance recitals and baseball games. The 1990s brought the addition of Susan’s husband, Tracy, and new granddaughters, Meg and Addie. Lea described this time as a “whole new lease on life.” Now retired, Lea and Bobby had plenty of time, a big yard, and many creative activities to host Meg and Addie on the weekends. The family continued to grow when Stuart’s children, Jada and Landen were born. After Bobby passed away in 2010, Lea could be found every morning taking long walks with her beloved friends. She adored the wonderful women in her Sunday School class. She was a friendly, kind and generous person. One of Lea’s greatest joys was being so close to her siblings who live in Okmulgee. They were her constant companions and filled her life with laughter and comfort. Lea is survived by her daughter Debi Markham of Tulsa; daughter Susan Robinett, her husband Tracy and their daughters Meg and Addie, also of Tulsa; grandson Stuart Swanson, his wife Lisa and their children Jada and Landen of Stillwater. She is also survived by sisters Helen Brock and Doe Dooley, and brother Denny Thomas, all of Okmulgee, along with sisters-in-law Erma, Donna and June, and numerous nieces, nephews and their extended families. Lea is predeceased by her parents, husband Bobby, daughter Jan and granddaughter Amy; also by her brothers Bob Thomas and Benny Thomas, and sisters Dorothy Holland and Cleota Hoffmeister. A Memorial Service will be held 11:00 A.M. Monday, January 29, 2018 at the First Baptist Church with Dr. Dennis Taylor officiating. A private family committal service will be held at the Okmulgee Cemetery. Arrangements have been entrusted to the McClendon-Winters Funeral Home of Okmulgee. Memories, condolences, photos and videos may be shared with the family on Lea’s Tribute Page of our website at www.mcclendon-winters.com

Leota Thomas Markham &#8220;Lea&#8221; was born on July 15, 1930 in Okmulgee, Oklahoma to Denny and Lula Thomas. The family already consisted of 4 children when Lea and her twin sister were born. Five years later, a set of twin boys would... View Obituary & Service Information

The family of Leota Markham created this Life Tributes page to make it easy to share your memories.