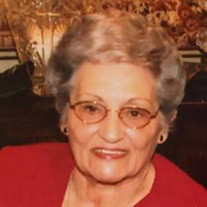 Lenora Bernice Bivin was born December 16, 1925 in Tahlequah, OK to John Hathcoat and Edna Hendricks. She passed away Friday, January 3, 2020 at The Springs in Muskogee, OK at the age of 94. She grew up and attended Tahlequah Public schools. Lenora met and married Grover Paul Bivin in Tahlequah on July 4, 1942. She and Grover made Okmulgee their home after World War II in 1950. Lenora was very active in the Okmulgee Quarterback Club and PTA . She enjoyed working in her flower beds, crocheting, and making crafts. Later on in life she liked completing cross word puzzles, and word searches. Lenora served on the Election Board, was an active member at Second Baptist Church, and she spent many hours volunteering at George Nigh. Her main focus was her family and making sure they were all taken care of. She was a Christian and a lifelong member of the Second Baptist Church in Okmulgee. The family would like to give special thanks to "The Springs" in Muskogee and Complete Care Hospice for all they have done for Lenora. Lenora was preceded in death by her parents, husband of fifty years Grover Paul Bivin, sons Gary Paul Bivin and Grover Dwain Bivin and an infant daughter, Donna Lea. Survivors include her daughters-in-laws Judy Bivin of Muskogee, OK and Rose Bivin of Okmulgee OK, granddaughter April Buck of Bixby, OK grandson Shane Bivin and wife Eden of Springdale, AR, and grandchild JoAnn Owen and husband Jerry of Morris, great grand children Jack Buck, Joe Buck, Lainey Bivin, Tyson Bivin, Jennnifer Reeves, Matt Owen and Greg Owen, and a host of great great grandchildren. Funeral services will be held 2:00 pm Thursday, January 9, 2020 at the McClendon-Winters Funeral Home Chapel in Okmulgee with Reverend Kelly Payne officiating. Friends may visit the funeral home from 1:00 pm until 8:00 pm on Wednesday, January 8, 2020. Arrangements have been entrusted to the McClendon-Winters Funeral Home of Okmulgee. Memories, condolences, photos and videos may be shared with the family on Lenora's Tribute Page of our website at www.mcclendon-winters.com

Lenora Bernice Bivin was born December 16, 1925 in Tahlequah, OK to John Hathcoat and Edna Hendricks. She passed away Friday, January 3, 2020 at The Springs in Muskogee, OK at the age of 94. She grew up and attended Tahlequah Public schools.... View Obituary & Service Information

The family of Lenora Bernice Bivin created this Life Tributes page to make it easy to share your memories.