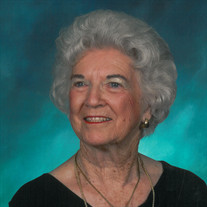 LaWanda Vaughn Kiser passed from this life on Saturday, July 15, 2017 at Grace Living Center in Stillwater, Oklahoma. McClendon-Winters Funeral Home in Okmulgee, Oklahoma is in charge of arrangements. Funeral Services will be held at Calvary Baptist Church in Okmulgee on Thursday, July 20, 2017 at 10:30 A.M. The family will receive friends from 5:00 P.M. until 7:00 P.M. Wednesday evening at the McClendon-Winters Funeral Home Chapel. LaWanda was born on May 25, 1923 in Milburn, Oklahoma to George Elton (G.E.)(Pop) and Alma (Mom) Marshall. She was their first born and only daughter. At the age of 10, she became a big sister to her first brother, Billy who passed away at two months old, followed by brother, Dick and then brother, Jim. Big Sister cared for Dick and Jim until she married the love of her life, Bill Kiser on June 4, 1939 at barely 16. She adored him from the day they met. She attended school at Rocky Hill, Nuyaka, Okmulgee, and Eram as well as Nursing School in Okmulgee Oklahoma. LaWanda and Bill lived at Eram with Mom and Pop for the short time after marriage, then moved to Oklahoma City, OK before coming home to the small farming community of Eram, at which time their son, Don, was born. A year later, Bill joined and served in the U.S. Navy during World War II. LaWanda traveled alone to Seattle, Washington and to Los Angeles, California on two separate occasions to join him on leave during his four years away from home. Following Bill's service, he and LaWanda purchased their farm. Their daughter Carol was born on that farm. They worked together and actively contributed to the Eram community. LaWanda was on the tractor "and" in the kitchen during those years. They were both very proud of their country heritage. After many years on the farm, they built a home in Okmulgee where LaWanda went to nursing school and upon completion of her training, she began her nursing career at Okmulgee Doctors Hospital. Following years of caretaking at the hospital, she was recruited to be the nurse, as well as manage the office, of Dr. Leo Huppert. Upon Dr. Huppert's retirement, she was recruited again by his colleague, Dr. Earnest Ross as his nurse and office manager. She loved these two doctors and their wives, Lila Huppert and Bea Ross. She visited and cared for these two lovely ladies for many years. Following her nursing career, she became a social worker for the Okmulgee County Department of Human Services. There she formed more relationships professionally as well as with her clients. She cared deeply for all she served. She was loving and understanding, but fair, and had a strong sense of right and wrong. She retired from DHS to be at home with Bill. She then volunteered as an Ombudsman at Okmulgee nursing homes and was also Chair of her local voting precinct. They spent time camping at Lake Okmulgee, traveling, and as much time as possible with their family and friends. LaWanda and Bill had a good marriage. They worked and played together and taught their children and grandchildren to do the same. They set a high standard to follow and taught us life lessons that have served us well. For that, we are ever thankful. We will miss her greatly. She has left us better people. We loved her very much. We give honor to our Mother, Grandmother, Sister, Aunt, Cousin and Dear Friend. LaWanda was revered by dear friends of whom she had many and was loved and respected beyond measure by her family. She made a difference in lives until she left us. She has left a legacy of admiration, inspiration and fairness. She had a strong spirit and a way of being very clear about where she stood. She loved being with her family and was always on the floor playing with the kids, even at 92. She traveled with her children and never wanted to miss any opportunity to just have fun. She loved dancing, listening to country western music, cooking for friends and family, gardening, crocheting (especially pot holders,) mending, working with ceramics, and volunteering, and was a talented poet and seamstress. LaWanda is preceded in by her parents, her husband, Bill Kiser, brother, Billy Marshall, brother Dick Marshall, brother-in-law Delmar Kiser and sister-in-law, Mildred Kiser. LaWanda is survived by her son Don Kiser of Oklahoma City, OK and her daughter Carol Ebert and husband Mike of Stillwater, OK; grandchildren, Ryan Ebert and wife Kellie of Stillwater, OK, Amy Ebert Koh and Angeline Koh of Dallas, TX, and Kelli Thompson and husband, Zach of Austin, TX; great grandchildren, Tyler, Jake, Cole and Gentry Ebert, Jordan, Austin and Michael Koh, and Caroline and Eliza Thompson; brother Jim Marshall and wife Kay of Jenks, OK, and sister-in-law Pat Marshall of Pineville, LA; and many nieces and nephews. The family would like to thank all of the staff of Baptist Village of Okmulgee, OK and Grace Living Center of Stillwater, OK where she lived for the past year of her life, and Good Shepherd Hospice of Tulsa, OK for their amazing love and care. We believe Mother made a difference in many of their lives and we know they made a difference in hers. LaWanda and her family are forever blessed by these people. Contributions may be made in LaWanda's memory to the Calvary Baptist Church in Okmulgee, Oklahoma. Memories, condolences, photos and videos may be shared with the family on LaWanda’s Tribute Page of our website at www.mcclendon-winters.com

LaWanda Vaughn Kiser passed from this life on Saturday, July 15, 2017 at Grace Living Center in Stillwater, Oklahoma. McClendon-Winters Funeral Home in Okmulgee, Oklahoma is in charge of arrangements. Funeral Services will be held at Calvary... View Obituary & Service Information

The family of LaWanda Vaughn Kiser created this Life Tributes page to make it easy to share your memories.

LaWanda Vaughn Kiser passed from this life on Saturday, July...