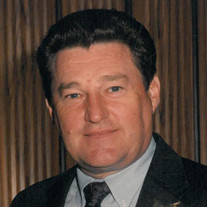 God lead Dr. Christy to his heavenly home on an idyllic September day, while outside the bedroom window, humming birds extracted nectar from the lantana and butterflies fluttered from blossom to blossom. He was surrounded by his family as he was escorted into the gates of Heaven. Larry was born on May 8, 1944, in Chandler, Oklahoma to Carl and Zelma Christy. He attended school at Wellston, Oklahoma being proud of the fact that he had 12 years perfect attendance. Larry graduated salutatorian of his high school in 1962, serving as their class president for 55 years, organizing reunions and keeping close relationship with his classmates. He married his fellow classmate, best friend, and high school sweetheart Zandra, they recently celebrated their 53rd wedding anniversary. Larry graduated from St. Louis School of Dentistry at the age of 23. He served as a Lieutenant during the Vietnam War in the United States Navy. He and Zandra decided to return to Oklahoma to begin his dental career, wanting to settle in a community with great fishing and hunting, they chose Okmulgee. He became active in the community serving in many capacities in the Eastern Oklahoma and State Dental Association. He served on the Beggs School Board for many years, and this year, at the age of 73, was elected to his most recent term. He was a generous supporter of the youth at the Okmulgee County Spring Livestock Premium Auction. He was also active in the Oklahoma Polled Hereford Association, and the Kiwanis club of Okmulgee. Larry loved his family, cattle ranching, hunting, John Wayne movies and finance, being a financial mentor to many young people. After their retirement he and Zandra spend many hours on their pontoon boat fishing for crappie and sand bass, filleting and giving them to former patients. Larry has been known to smoke 17 chickens at a time delivering them to his neighbors at the lake and smoking hot links for his sister-in-law. He was a man loved and respected for his character, he never expected more than what he himself was willing to give, whether it was time or money. He will be missed, especially by his wife and children Larry Todd Christy, Jamie and David McCoy, Tonya and Rob Hawkins, Dr. Tyson and Kristi Christy, grandchildren C.J., McKenzie, Dalton, Daxton, Colin, Cole, Baylor, and Tessa, his brother and wife Tommy and Frances Christy, and special-like-family friends Daryl and Charlotte Contreras. Larry said as a kid he had three goals, to always have a cold coke in the refrigerator, eat steak at every meal and become a millionaire, he said attaining two out of the three wasn't bad! Larry will forever be remembered by his grandchildren for two favorite sayings "Life's not fair" and "Make wise choices" He ended all person correspondence with "Keep Smiling!" He entered Heaven "smiling!" A memorial service for Dr. Larry Christy will be held 11:00 A.M. Saturday, September 30, 2017 at the Crossroads Baptist Church with Reverend Travis Markes officiating. In lieu of flowers the family ask for donations be made to HANDS Changing Legacies, P.O. Box 126 Glenpool, OK 74033. Arrangements and Cremation services have been entrusted to the McClendon-Winters Funeral Home of Okmulgee. Memories, condolences, photos and videos may be shared with the family on Dr. Christy’s Tribute Page of our website at www.mcclendon-winters.com

God lead Dr. Christy to his heavenly home on an idyllic September day, while outside the bedroom window, humming birds extracted nectar from the lantana and butterflies fluttered from blossom to blossom. He was surrounded by his family as he... View Obituary & Service Information

The family of Dr. Larry C. Christy DDS created this Life Tributes page to make it easy to share your memories.

God lead Dr. Christy to his heavenly home on an idyllic September...