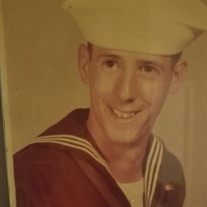 Kenneth Eugene “Jap” Walls, a resident of Okmulgee, passed away on Friday, June 28, 2019 in Tulsa, Oklahoma at the age of 68. Known by his family as a loving husband, father, brother and friend to all, Kenneth was born on March 13, 1951 in Saporo, Japan to the late George Ralph Walls, and Rosemary (Martin) Moore. Kenneth was a graduate of Schulter High School and served in the United States Navy during the Vietnam era. He was a lifetime member of the VFW Post 1189 serving as Senior Vice Commander. He lived in Houston for several years and also in Washington State before making his home in Okmulgee. Kenneth enjoyed fishing, hunting, woodworking, playing bingo and was an avid OU Sooner fan. Kenneth worked as a carpenter and also in the trucking industry as a driver and a mechanic. Kenneth is preceded in death by his parents, son Greg, and 4 siblings, Ralph, Sharon, Mary Jo and Elaine. Left to cherish the memories of Kenneth are his wife, Mary Walls of Galena Park, Texas, two daughters, Katherine Knight and Rosemary Rogers of Oklahoma City, Oklahoma, one sister, Louellen Barker, of Okmulgee, Oklahoma, nieces, Bobbie Jo Blake, of Schulter, Oklahoma and Amanda Wright, nephews, Raymond Ellis, Charles Wright and Logan Wright along with nine grandchildren and one great grandson. Celebration of Life services will be held at 2:00 P.M. on Tuesday, July 2, 2019 at the McClendon-Winters Funeral Home Chapel in Okmulgee. Military Honors will be provided by the United States Navy Funeral Honors Team. In lieu of flowers, the family requests that memorial contributions be made in Kenneth’s name to the American Cancer Society, VFW Post 1189 or any charitable organization of their choice. Cremation services have been entrusted to the McClendon-Winters Funeral Home of Okmulgee, Oklahoma. Memories, condolences, photos and videos may be shared with the family on Kenneth’s Tribute Page of our website at www.mcclendon-winters.com

The family of Kenneth Eugene Walls created this Life Tributes page to make it easy to share your memories.

Kenneth Eugene “Jap” Walls, a resident of Okmulgee, passed away...