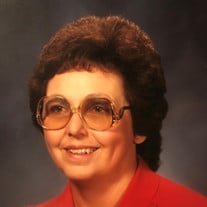 June Parker, loving Wife, Mother, Grandma, Great Grandma and dedicated teacher, passed away at her home surrounded by family and friends on April 24, 2018. She was born in Morris, OK on February 17, 1936 to Jake and Leota Reynolds. June was raised in the First Christian Church of Morris and graduated from Morris High School in 1954. While in school she met the love of her life Charley Parker and they were married on June 20, 1954 at the Patti Anne Café in Henryetta, OK by Brother George Boston. June and Charley moved to Fairfax, OK in 1955 where they raised their four children. In 1979 June fulfilled her lifelong dream and became a Teacher and Theatre Director at Fairfax High School where she taught for 29 years. After retiring June and Charley returned to Morris where she spent the remainder of her life. June was preceded in death by her parents, brother Bud Reynolds, sisters Maxine Biby and Edith Vance and son-in-law Rick Whiting. She is survived by her husband of 63 years Charley Parker of Morris, OK; daughters, Patti Anne Gates of Broken Arrow, OK; Edie Lynne Whiting of Collinsville, OK; Becky June Batschelett and husband Greg of Bristow, OK; son, Charles Russell Parker of Broken Arrow, OK; 11 grandchildren, Andria and Donnie Wells, Aaron and Amber Burks, Scott and Kaycee Batschelett, Sean Batschelett, Katie and Matt Worth, Kyle and Jessica Gates, Jakeb Gates, Jared and Jessica Gates, Lyndie Benton-Whiting, Kaleb Gates and Kolby Gates; 18 great grandchildren; sister Stella Davis and husband Charles of Morris, OK; Brother David Reynolds and wife Mary Jane of Morris, OK; and numerous nieces and nephews. The family also wishes to express their sincere love and gratitude to the amazing Grace Hospice Team who has assisted in June’s care for the past two years. Funeral services will be held at Trinity Baptist Church in Morris, OK, at 10:30 am on the morning of Monday, April 30, 2018. The service will be officiated by Chaplain Dave Peterson and Pastor Tim Craighton, and followed by a graveside service at the Morris Cemetery. Family and Friends are invited to join for a period of visitation from 4:00 – 6:00 pm on Sunday, April 29, 2018 at the McClendon-Winters Funeral Home in Okmulgee, OK. Memories, condolences, photos and videos may be shared with the family on June’s Tribute Page at www.mcclendon-winters.com. Memorial contributions in lieu of flowers may be made to Grace Hospice of Tulsa, OK.

June Parker, loving Wife, Mother, Grandma, Great Grandma and dedicated teacher, passed away at her home surrounded by family and friends on April 24, 2018. She was born in Morris, OK on February 17, 1936 to Jake and Leota Reynolds. June was... View Obituary & Service Information

The family of June Parker created this Life Tributes page to make it easy to share your memories.