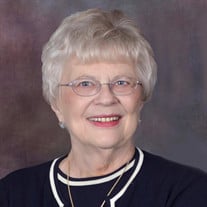 Judith Ann (Janzen) Alexander passed away peacefully following a brief illness on Thursday, March 29, 2018 at St John Hospital surrounded by her loving husband, children and brother. She was born on October 24, 1938 in Ponca City, OK to the late Jacob H and Alice (Goble) Janzen. Judy grew up in Tulsa and graduated from Will Rogers High School in 1956. She went on to attend the University of Oklahoma and was a member of Gamma Phi Beta sorority. She graduated in 1960 with a Bachelors of Science in Nursing. While at OU, Judy met the love of her life and best friend, Tom Alexander, and went on to marry him on August 12, 1961. They had 56 adventurous and fun filled years together which included a year in Phoenix, AZ, three in New Orleans, LA and two at Ft Stewart, GA before they settled in Okmulgee, OK in 1969. Through the years, Judy was very active in her community, but had a special place in her heart for children, education and social justice. She began with her active role in the successful campaign in the early 1970’s for a large bond issue to build two new elementary schools in Okmulgee. Shortly thereafter, she was elected to the Okmulgee School Board and served over 12 years as both a member and as president. In this role she had the privilege of presenting 3 of her 4 children and 5 nieces and nephews with their high school diplomas. Judy continued her passion for education by serving on the Okmulgee Education Foundation Board in the early years of development. Judy was in PEO Chapter ER, serving as president and as an active member. She also belonged to the Okmulgee Art and Literature Club. Judy was a member of the Tuesday night bridge group for 45 years and loved visiting, laughing and even playing a few hands of bridge! Judy was a very active member of the First Presbyterian Church in Okmulgee. She was most enthusiastic about the mission work of her church - from preparing and serving meals at Open Gate (a mission of the local Episcopal church), preparing backpacks for children at the youth shelter and women’s shelter to providing supplies for the Homeless Shelter and women‘s shelter. One mission that she loved and enjoyed for almost 20 years was traveling to Hugo to visit Goodland Academy, speaking with each of the boys to find out what they wanted for Christmas. She loved talking to the boys and purchasing gifts for them. On the first Sunday of December, the boys from Goodland attended the service, enjoyed a potluck from their requests and received their gifts. She saw so many of the boys at Goodland grow into amazing young men through the years. Judy will always be remembered by those who knew her well and those she met in passing as a kind and gracious woman. She had a loving and genuinely accepting heart. She was the strong foundation of her family and loved them passionately. Her children and grandchildren were her pride and joy and she always had a story to share about one of them. Judy has left a void in her family that will be impossible to fill. Her smile and laughter were contagious. Her salad and cheese balls were legendary. Her generosity, humility and inclusiveness were remarkable. Her love was unconditional. Judy was preceded in death by her father and mother. She is survived by her loving husband, Dr Thomas C Alexander, Sr of the home; son, Tom Alexander, Jr of Salt Lake City, UT; son, Tim and wife Betsy Alexander of Canadian, TX; daughter, Pam and wife Trisha Alexander of Bixby, OK; daughter, Marie Alexander of the home. She is also survived by her three amazing grandchildren, whom she loved more than they can know, 1st LT Ryan Alexander of Ft Drum, NY, Annie Alexander of Lawrence, KS and Emily Alexander of Canadian, TX and her brother, Robert Janzen and Barbara Flowers of San Antonio, TX. She is also survived by her brother-in-law Dr Bob, Jr and Julia Alexander, sisters-in-law Dr Ann Alexander and Kathryn Alexander and wife Dr Alicia Casas Celaya, a host of nephews, nieces and great nephews and nieces along with all of the friends she loved so dearly. Pallbearers are her nephews: Jeff Alexander, James Alexander, Matt Carey, Michael Carey, Alan Janzen, Philip Janzen and Dan Sulivant. Honorary pallbearers are: Dr Raymond Miller, Dr Edward Osborn, Dr Jerry Thorman, Tom Slamans, Bill Barksdale and Craig Brydges. The family will receive friends Monday eving from 6:00 P.M.-8:00 P.M. at the McClendon-Winters Funeral Home Chapel. A funeral service will be held 2:00 P.M. Tuesday, April 3, 2018 at the First Presbyterian Church with Reverend Dr. Jeff Francis and Reverend J. Rodgers Spencer officiating. Interment will follow in the Okmulgee Cemetery. Contributions may be made in Judy’s memory to the First Presbyterian Church of Okmulgee or the Goodland Academy, 1216 N. 4200 Rd., Hugo, OK 74743. Arrangements have been entrusted to the McClendon-Winters Funeral Home of Okmulgee. Memories, condolences, photos and videos may be shared with the family on Judy’s Tribute Page of our website at www.mcclendon-winters.com

Judith Ann (Janzen) Alexander passed away peacefully following a brief illness on Thursday, March 29, 2018 at St John Hospital surrounded by her loving husband, children and brother. She was born on October 24, 1938 in Ponca City, OK to the... View Obituary & Service Information

The family of Judith A. Alexander created this Life Tributes page to make it easy to share your memories.