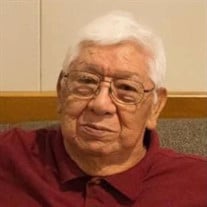 Joseph “Sonny” Lowe Jr., 88, departed from this life to be with the Lord on Friday, September 24, 2021. Joe was Born on December 1, 1932, in Yeager, OK to Rev. Joseph Lowe Sr. and Hepsey (Harjo) Lowe. Joseph was Valedictorian when he graduated at Pecan Grove School. He went on to graduate high school at Haskell Indian School in Lawrence, Kansas. Joe was a lifetime member of Wewoka Indian U.M.C where he served with a servant’s heart in different capacities. Joe worked in Chicago, Illinois until he joined the Army and Served from 1954-1956. Joe married the love of his life, Louise Boydstun, on May 3, 1960. To this union three daughters were born: Tracey, Anita, and Anna. Joe worked in the pipeline field and was grounds keeper of the Holdenville Cemetery for 12 years until he became a minister with the Oklahoma Indian Missionary Conference. He would serve 22 years in the Ministry before retiring in 1998. Joe would pastor Jay Tsalagi, Pickett Chapel, Mary Lee Clark and Newtown United Methodist Churches. He also served as district Superintendent for 4 years for the Northeast District Region. After Retirement he continued ministering at Wewoka, Arbeka and Concharty. He continued to speak at other churches, preached funerals, performed weddings, baptisms and consecrated the sacraments for other churches when called upon. Joe enjoyed playing fast-pitch softball as a pitcher for many years until he was called into the ministry. He also enjoyed watching OU football and softball, OKC Thunder and working crossword puzzles. Joe loved the Lord, his family and friends, reading his bible and going to church. Today, Joe would be encouraging each and everyone to continue their walk with the Lord, have faith and always keep God first in their life. Prior to each of his sermons Joe was known for quoting the following saying: “Today I asked God for many things so I could enjoy life. Today, he gave me life, now I can enjoy many good things.” Joe is preceded in death by his parents, 2 infant siblings Johnny Ray and Angeline May, 2 sisters Margaret Marshall and Elsiephine Elliott, 1 brother Eugene “Hardy” Lowe and daughter Tracey Lowe. Joe is survived by his loving wife of 61 years, 2 daughters Anita Watashe and husband Mark of Okmulgee, OK and Anna Lowe of Okmulgee, OK. 1 sister Matilda King of Holdenville, OK and many loving nieces, nephews, cousins and friends. Night Service will be held on Tuesday, September 28, 2021, at 7:00 P.M. at Wewoka Indian U.M.C, in Yeager, Oklahoma. A funeral Service will be held at 2:00 P.M. Wednesday, September 29, 2021, at Wewoka Indian U.M.C. with Reverend Eli McHenry officiating. Interment will follow across the street at Wewoka Indian U.M.C. Cemetery. Pallbearers will be : Robert King, Kevin King, Phillip Marshall, Michael Louse, Johnny Wood, Matthew Boydstun, Bobby Boydstun, Ryan Smith, JB Smith, Sam Osborne and Mark Watashe. Honorary Pallbearers; Joe Watashe, Jerry Wilson, Ben Larney, Gilbert Matthews, Troy Boydston, Roy Boydstun, the ministers of the O.I.M.C. and, men of Wewoka Indian United Methodist Church. The family requests those attending the service please wear a mask. Arrangements have been entrusted to the McClendon-Winters Funeral Home of Okmulgee. Memories, condolences, photos and videos may be shared with the family on Reverend Lowe’s Tribute Page of our website at www.mcclendon-winters.com

The family of Rev. Joseph Lowe Jr. created this Life Tributes page to make it easy to share your memories.