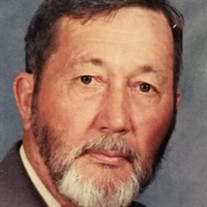 Johnny Craig Hamilton of Beggs, Oklahoma was born on September 17th, 1932 south of Beggs down the railroad track in the yellow house. He passed away March 17, 2020. He was the third child; the second son of seven, born to Mattie Lee Nimmo and William Craig Hamilton, which two more survive him. He went to school at Borger, Hutchinson, Texas and Beggs, Oklahoma. Moving from one to the other until his father’s death in 1945 when the family moved to Beggs to stay. He graduated from Beggs High School in 1950. Johnny was in the National Guard at Beggs, and when the Korea conflict started in 1951 the National Guard at Beggs were mobilized to 279th Tank Co. of the 45th division. Johnny returned in 1952 and went to work in Tulsa with the Western Electric Company. He married Christine Thompson on June 21st, 1952 in Okmulgee; they then returned to Lawton to his job. He traveled around Oklahoma and surrounding states with his job but maintained a home in Beggs. In 1982 he retired to the farm; so that he could chase the cattle and watch the water flood the farm. He was preceded in death by: his parents; wife Christine; daughter Jan Lantz; siblings, Bill & Bobby Hamilton, Mary Ruth Hamilton Ellis Osborn Southard, Geneva Hamilton Keith, Ruthie Lee, Dorothy Reed, Beulah St. Cyr, Eula Swanson, Archie, Art, Billy and Earl Wagoner. Survivors include: sons, David and Robin Hamilton, Phil and Sue Hamilton, and Doug Hamilton; grandchildren, Gary and Amber Lantz, Johnny Lantz, Aaron and Becky Hamilton, Amy and Jerry Jackson, Craig Hamilton, Adam and Kara Hamilton, Amber and Danny Hahn, Ashley and Shelby Baughn, and Beth Hamilton; sister, Betty McDaris; brother, Jim and Judy Hamilton and Troy and Peggy Wagoner; sisters-in-law, Maxine Hamilton, and Kay Hamilton; daughters-in-law, Sandra Ott Hamilton and Kay Hamilton Hyams and son-in-law, Dale Lantz. The family will receive friends Thursday evening from 6:00 P.M.-7:00 P.M. at the McClendon-Winters Funeral Home of Beggs. A funeral service will be held 2:00 P.M. Friday, March 20, 2020 at the McClendon-Winters Funeral Home Chapel with Reverend David Hamilton officiating. Arrangements have been entrusted to the McClendon-Winters Funeral Home of Beggs. Memories, condolences, photos and videos may be shared with the family on Johnny’s Tribute Page on our website at www.mcclendon-winters.com

Johnny Craig Hamilton of Beggs, Oklahoma was born on September 17th, 1932 south of Beggs down the railroad track in the yellow house. He passed away March 17, 2020. He was the third child; the second son of seven, born to Mattie Lee Nimmo... View Obituary & Service Information

The family of Johnny Craig Hamilton created this Life Tributes page to make it easy to share your memories.

Johnny Craig Hamilton of Beggs, Oklahoma was born on September...