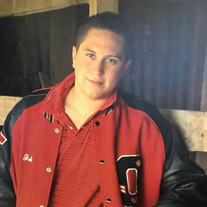 John McKenzie Segars joined his grandparents, John Walter and LaHoma Segars and good friend Luke Holleman inside the gates of Heaven on Friday, July 7, 2017 at the age of 30. He was born on January 11, 1987 at the Okmulgee Memorial Hospital to Linda Segars. At a very young age it was obvious that John McKenzie had a great love of people and always showed compassion and concern for everyone. While attending Okmulgee Eastside Elementary his principle and teachers saw a young boy making sure his fellow students has pencils, crayons, and of course candy. His compassion overflowed as he would help his classmates with homework and study in general. John was named Okmulgee Middle School Male Student of the Year. John had an avid love for sports of any kind. He started with T-ball, soccer, basketball, baseball but he found athletic skills for the game of tennis. As a freshman John finished third in tennis doubles at the Oklahoma Secondary School Association State Tournament. He competed and made the State Tournament his remaining three years in doubles at the Okmulgee High School garnering him for a four year letterman in tennis at OHS. John was also ranked for several years in the top twenty in tennis doubles in the Missouri Valley Tennis Association. His accomplishments were not only as an athlete but his academics as well. John was a three year member of the National Honors Society and he also was an Outstanding Team Member of the OHS Academic Team! John attended OU and OSU. He enjoyed volunteering for the Relay for Life, reading and listening to his favs in the music industry! His above accomplishments and his love of all animals- especially his and anyone's canine fur babies along with his infectious smile, gentle laugh, big hugs and the only words John would say after the hug "I Love You" made him John McKenzie Segars! John has left his mother, Linda, his beloved fur babies Savanah, Baker Mayfield, Gracie, Brooklyn, and Bailey and a host of friends and family members to pass on his legacy on to others. A Funeral Service for John will be held 2:00 P.M. Thursday, July 13, 2017 at First Christian Church in Okmulgee with Reverend Rocky Ausbrooks and Pastor Charlie Green officiating. Interment will follow at the Okmulgee Cemetery. Friends may visit the funeral home on Wednesday, July 12, 2017 from 9:00 A.M. until 8:00 P.M. Family will be present to receive guest from 6:00 P.M. - 8:00 P.M. Pallbearers will be Jesse Graham, Ryan Brown, Brad Williams, Matt Mabrey, Kris Davis, and Clint Hames. Honorary Pallbearers will be the Okmulgee High School Class of 2005. Arrangements have been entrusted to the McClendon-Winters Funeral Home of Okmulgee. Memories, condolences, photos and videos may be shared with the family on John’s Tribute Page of our website at www.mcclendon-winters.com

John McKenzie Segars joined his grandparents, John Walter and LaHoma Segars and good friend Luke Holleman inside the gates of Heaven on Friday, July 7, 2017 at the age of 30. He was born on January 11, 1987 at the Okmulgee Memorial Hospital... View Obituary & Service Information

The family of John McKenzie Segars created this Life Tributes page to make it easy to share your memories.