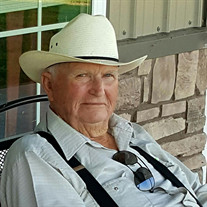 John William Hale, resident of Okmulgee, passed away in Tulsa on Monday morning, September 12, 2016. He was born on June 6, 1929 in Sterling, Oklahoma to the late John Wesley and Myrtle Hale. John married Leona Combs in 1950 in Chowchilla, California where he worked as a farmer and rancher until 1963 when he and Leona moved to Hanna, Oklahoma. There he farmed watermelons and peanuts, and ran quarter horses and cattle. John was also a partner at Hale Fence Company. He was a hard worker, and passionate about what he did. He was a long-time member of the Assembly of God Church. John is preceded in death by his parents, a sister, "Sis" Hale, and brothers, Don Hale, Raymond Hale, Cletus Hale, J.D. Hale, Benny Hale and Leroy Hale. Left to cherish his memory are his beloved wife of 66 years, Leona Hale, of the home, son Jerry Hale and wife Sondra of Okmulgee, daughter Vickie Peters and husband Edward of Eufaula, son Keith Hale and wife Valerie of Okmulgee, grandchildren Jason Peters, Jared Hale, Aimee Mason, Damian Kelley, Cameron Smith, Alexandra Smith, and Hailey Smith, great-grandchildren Trenton, Haiden, Parker, Ethan, Emma, Preston, Ava, Payton K., Payton H., and Gentry, along with his sister Jeanette Semore, and a host of nieces and nephews. A funeral service for John will be held at 10:00 a.m. on Friday, September 16, 2016 at First Baptist Church of Okmulgee, with Reverend Marcus Alexander and Reverend Jack Vance officiating. Serving as casketbearers will be George Mouser, Shorty Wood, Gary Gray, Willie Anderson, Bart Bailey, and Joe Madalone. Friends may visit the funeral home on Thursday, September 15, from 1:00 p.m. until 8:00 p.m. with the family receiving guests from 6:00 p.m. until 8:00 p.m. Arrangements have been entrusted to McClendon-Winters Funeral Home of Okmulgee.

John William Hale, resident of Okmulgee, passed away in Tulsa on Monday morning, September 12, 2016. He was born on June 6, 1929 in Sterling, Oklahoma to the late John Wesley and Myrtle Hale. John married Leona Combs in 1950 in Chowchilla,... View Obituary & Service Information

The family of John William Hale created this Life Tributes page to make it easy to share your memories.

John William Hale, resident of Okmulgee, passed away in Tulsa...