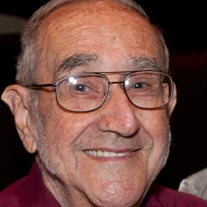 John Allen Grammer, Sr, longtime Morris resident, passed away Friday morning, April 7, 2017 at 94 years of age. John was born October 21, 1922 in Clark County, Iowa to the late Thomas and Rachel (Hamblen) Grammer. He married Ruth Fowler on March 30, 1946 in Michigan. He served his country during World War II as a Military Police Officer. After his return from the war, John joined the Teamsters and drove a truck until his retirement in 1975. They then relocated to Oklahoma and John worked in the Automotive Parts business for many years. He enjoyed restoring old cars, working in the garage and going for a car ride. He also enjoyed working jigsaw puzzles. He was preceded in death by his parents, wife, a daughter, Marti Rumsey, two sons, Tom and Tim Grammer, a sister, Celia House and two grandchildren, Brian Grammer and Amy Welton. John is survived by his children, John Grammer, Jr. of Morris, Ruth Welton and husband Rocky of Morris, Debbie Hurt and husband Bob of Okmulgee, Diana Welton and husband Bob of Morris and Mary Beth Grammer of Okmulgee, a daughter-in-law, Mary Grammer of Morris, twenty eight grandchildren, fifty great grandchildren and numerous great great grandchildren. Friends may visit the funeral home on Wednesday from 9:00 A.M. – 8:00 P.M. and the family will be present to receive friends from 5:00 P.M.-8:00 P.M. A funeral service will be held 10:00 A.M., Thursday, April 13, 2017 at the First Baptist Church of Morris with Pastor Randy Mathews officiating. A committal service will follow in the Okmulgee Cemetery with Military Honors. Arrangements have been entrusted to the McClendon-Winters Funeral Home of Okmulgee. Memories, condolences, photos and videos may be shared with the family on John’s Tribute Page of our website at www.mcclendon-winters.com

The family of John Allen Grammer Sr. created this Life Tributes page to make it easy to share your memories.