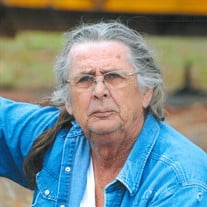 Jimmie Wayne Wesley passed away Friday, January 11, 2019 at his Beggs residence. He was 71 years of age. Jim was born November 3, 1947 to the late Mitchel Wesley, Jr. and Mary Jane (Owen) Wesley in Okmulgee. Jim graduated from Beggs High School and married Ellen Kay Rose in 1968. They later had two daughters, Angela and Michelle. Jim and his family made their home in Beggs, later relocating to Port Arthur, Texas and then settling in Dayton, Texas for a number of years. Jim and his family moved back to Oklahoma in 1991. Jim was preceded in death by his parents and a sister, Janie Sue Chambers. He is survived by his wife Ellen, two daughters, Angela Kouplen and husband Buster and Michelle Dooly and husband Erin, all of Beggs, grandchildren, Bailee Flinn of Claremore, Trenton Kouplen of Tulsa, Devyn Stout, McKenzie Kouplen, Coleton Wesley, Austin Dooly, Kirsten Dooly, and Abigail Hinkley, all of Beggs, two great-grandchildren Avery and Hollyn, a niece Jenny Lynn Chambers of Mounds, a great nephew and niece Boston and Stella, and a brother by love and friendship Max Chambers of Liberty Mounds. Jim leaves behind numerous nieces and nephews, cousins and brother-in-laws and sister-in-laws. He was loved by many family members and numerous friends who he considered family. When Jim and Ellen moved back to Beggs in 1991, he took over his father’s backhoe business, Wesley Backhoe. This business suited Jim very well, as he was a friendly and outgoing man who never met a stranger. Jim loved hunting in Oklahoma and Colorado, looking for that next big deer or elk. Jim was quite the mechanic. He could fix anything from his backhoe, to cars, to lawn mowers. He loved to tinker and fix most anything that was in need of repair. He was also quite the wood worker. When Jim was not working he was enjoying his family. In recent years you would see Jim at any activity where his grandchildren were involved. An “ice cream social” will be held in honor of Jim and his favorite treat during visitation on Thursday, January 17th from 2 P.M. – 8 P.M. at McClendon-Winters Funeral Home in Beggs. Services will be Friday, January 18th at Crossroads Baptist Church with Reverend Chad Eads officiating and Reverend Jack Carner, beloved friend and cousin will be speaking. Interment will follow at Beggs Cemetery. Casketbearers will be Buster Kouplen, Trenton Kouplen, Devyn Stout, Erin Dooly, Austin Dooly, and Coleton Wesley. Honorary casketbearers will be Dallas Hampton, Losson Ritter, David Powers, Tim Smith, Max Chambers, Shaun Culbert, and Luke Carner. Arrangements have been entrusted to the McClendon-Winters Funeral Home of Beggs. Memories, condolences, photos and videos may be shared with the family on Jim’s Tribute Page of our website at www.mcclendon-winters.com.

The family of Jim Wesley created this Life Tributes page to make it easy to share your memories.