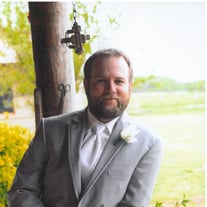 Jeffery Michael Leach, 36 year old Jenks resident, passed away Sunday, November 12, 2017 at his home surrounded by his family. He was born October 15, 1981 in Ada, Oklahoma to Jesse Wayne and Patricia Jo (Clifford) Leach. He graduated from Henryetta High School in 2000 and in 2003 joined the U.S. Army. Jeff served overseas for 13 months during the Iraq War and was honorable discharged in September 2008. He then attended OSU-Okmulgee earning an Associate Degree in 2010. He worked for Diversified as a lineman. Jeff and Nikki Dunham were married on May 4, 2013 in Okmulgee. He loved yardwork and cutting down trees. He was an avid OU Football fan. Jeff’s greatest love was playing with his daughter and being with his family and friends. Jeff was preceded in death by his paternal grandparents, Jesse Franklin Leach and Lena Irene Leach, maternal grandparents, Jack Clifford and Mozelle Clifford and uncles, Harvey Holliman, Jimmy Clifford and Glendel Rayburn. Survivors include his wife, Nikki Leach of the home, daughter, Emmie Leach, parents, Jesse and Patricia Leach of Henryetta, brother, Eric Leach and wife Lauren of Jenks, niece and nephews, Kathryn, Benjamin and Luke Leach, father-in-law, Dell Dunham of Okmulgee, mother-in-law, Richelle Dunham of Jenks, aunts and uncles, Imogene and Otto Harrington of Allen, Sue Holliman of Edmond, Clyde and Jamie Leach of Ada, Shelba Rayburn of Ardmore and Rosalie Clifford of Okmulgee, brother-in-law Jeremy Dunham and wife Laura and niece Novella Dunham, and numerous cousins and family. He is also survived by his cat, Princess. A funeral service will be held 1:00 P.M. Friday, November 17, 2017 at the Henryetta Nazarene Church with Reverend Tim Cole officiating. Interment will follow in the Holdenville Cemetery. Casketbearers will be Bryan Garner, Sprint Williams, Chase Williams, Roy Crandell, Jason Salsman, Ralph Duenas, Ty Bennett, Bryan Rawlings and Jeremy Beck. Honorary casketbearers will be Jeremy Clifford, Travis Rayburn and Trisha Gail Heath. A fund has been established for his daughter, Emmie, at the First National Bank of Okmulgee c/o Peggy Dangott. Arrangements have been entrusted to the McClendon-Winters Funeral Home of Okmulgee. Memories, condolences, photos and videos may be shared with the family on Jeff’s Tribute Page of our website at www.mcclendon-winters.com

Jeffery Michael Leach, 36 year old Jenks resident, passed away Sunday, November 12, 2017 at his home surrounded by his family. He was born October 15, 1981 in Ada, Oklahoma to Jesse Wayne and Patricia Jo (Clifford) Leach. He graduated from... View Obituary & Service Information

The family of Jeffery Michael Leach created this Life Tributes page to make it easy to share your memories.