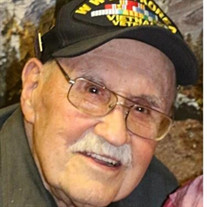 James (Jim) Patrick Vaughn passed to new life in Christ on January 5, 2021. His 98 years started on a small farm in Carey, Ohio. He excelled in parochial and public school, graduating as salutatorian of his high school class. After graduation, he worked in the Carey area for the local railroad, and for the county health inspector. During WWII, he volunteered for US Navy aviation cadets, but was inducted into the US Army after Navy records were destroyed by fire in the courthouse. He quickly volunteered for flight duty, and trained as a flight engineer/top turret gunner in the new Consolidated B-24 Liberator. His unit, the 450th Bomb Group, arrived in southern Italy on Christmas, 1943, and began combat operations on January 9th. His crew flew Judy Lee, named after the pilot’s baby daughter. His group attacked targets in Yugoslavia, northern Italy, and Germany. As gunner, he was credited with one half of a kill of an enemy fighter plane. On his 14th mission, the aircraft was disabled by anti-aircraft fire over Regensburg, Germany. Jim assisted the pilot in controlling the airplane, and later helped other crewmembers bail out. Jim parachuted, and evaded capture in the mountainous winter, until his repatriation to Italy a month later. The remainder of his flying career was stateside, flying Air-Evac medical missions in the US. He was stationed at Westover Field, MA when he met the love of his life, Jeannette R. Chaquette at a USO dance. They were married for 65 years. After the war, Jim continued his career in the US Air Force, eventually rising to the top enlisted rank of Chief Master Sargent. He and Jeannette raised a family of two children, with assignments in New Jersey, Kansas, Japan (twice), and Texas. He supported combat operations in Southeast Asia as maintenance line chief for a wing of F-105 Thunderchiefs at Korat AB, Thailand. After retiring from the USAF in 1973, Jim attended and later taught automotive mechanics at Oklahoma State Tech in Okmulgee, Oklahoma, until his retirement there in 1993. During his time at Tech, Jim earned his master’s degree at Oklahoma State University. Jim lived his faith as a member of St Anthony of Padua and Uganda Martyrs Catholic churches. He was active in the Knights of Columbus, and at one time labeled, “Tootsy-roll king” by locals for his extra efforts in that charitable effort. He also served his community in the Lions Club, and political groups. He was proud of his town, his church and looked for ways to help, big and small. In 2017, Jim moved to O’Fallon IL to be closer to family. There, he was active in the lives of children, grandchildren, and great-grandchildren (who called him “GG Vaughn”). He is survived by, two children, Robert Vaughn and Cheryl Brussow, three grandchildren, Christopher Brussow, Matthew Vaughn, Bethany Resner, eight great grandchildren, Ethan Brussow, Caleb Brussow, Samuel Brussow, James Vaughn, Caris Vaughn, Charlotte Resner, Benjamin Resner, and Robert “Bo” Resner, two great-great grandchildren, Kensley Brussow, Hunter Brussow, and one brother, Paul Vaughn of Tiffin Ohio. Jim’s life was a testimony to a kind and loving spirit; he touched many beyond his family with his unassuming heart and welcoming smile. Events for his July 22-23 remembrance in Okmulgee are listed below. The funeral is supported by McClendon-Winters of Okmulgee, OK. For the funeral, donations in lieu of flowers are welcomed for St Anthony of Padua, and Uganda Martyrs Catholic churches.

James (Jim) Patrick Vaughn passed to new life in Christ on January 5, 2021. His 98 years started on a small farm in Carey, Ohio. He excelled in parochial and public school, graduating as salutatorian of his high school class. After graduation,... View Obituary & Service Information

The family of James Patrick Vaughn created this Life Tributes page to make it easy to share your memories.