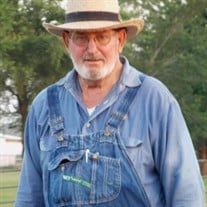 James H. “Jim” Melton was born Friday, November 23, 1945 in Yellville, Arkansas to the late Omer Melton, Sr. and Pauline (Raby) Melton. He passed away Thursday, December 24, 2020 in Muskogee at 75 years of age. Jim served his country in the United States Navy. He was Honorably Discharged on October 11, 1967. Jim worked as a firefighter for the Okmulgee Fire Department, served as the Morris Police Chief, was a heavy equipment operator, small engine repairman and carpenter. He also owned numerous businesses including MRM Security and JNK Express. He enjoyed gardening, fishing, hunting and taking care of his cows. Jim was married to Kim (Wallingford) Melton on October 13, 1990 in Harrison, Arkansas. He will be remembered for his impromptu family dinners when he would fire up the grill and everyone was invited. Jim was preceded in death by his parents, sisters, Euna Phillips and Georgie Killebrew and brothers, Omer Melton, Jr. and Frankie Melton. Survivors include his wife, Kim Melton, children, Dylan Melton, Shanna Tyler and husband Chris, Kenny Melton and wife Robin, Bryan James and wife Karla and a special son, Casey Thomas, grandchildren, Matthew, Michael, Emilie, Trenton, Madison, Lane, Justin, Dawson, Amber and Kassi, numerous great grandchildren, adopted grandchildren and nieces and nephews, a sister, Bonnie Martin, brother, G.C. Melton and wife Phyllis, mother-in-law, Jean Richmond and his dogs, Petey and Bridgett. Friends may visit the funeral home on Wednesday, December 30, 2020 from 1:00 P.M. – 8:00 P.M. at the McClendon-Winters Funeral Home. A private family committal service will be held at Ft. Gibson National Cemetery on Thursday. Arrangements and cremation services have been entrusted to the McClendon-Winters Funeral Home of Okmulgee. Memories, condolences, photos and videos may be shared with the family on Jim’s Tribute Page of our website at www.mcclendon-winters.com

The family of James H. "Jim" Melton created this Life Tributes page to make it easy to share your memories.