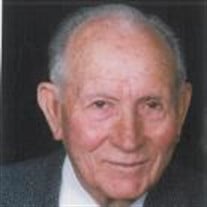 James L. "J.L." Jones of Okmulgee, Oklahoma and formerly of Beggs and Seminole, Texas passed away June 28, 2016 in Broken Arrow at 94 years of age. J.L. was born August 28, 1921 in Limestone County, Texas, to the late Ruben LaFayette and Mary Lou (Blair) Jones. On December 18, 1941, he married the love of his life, Annette Thomas. She passed away May 3, 2014. They celebrated their 72nd wedding anniversary December 18, 2013. J.L. was raised on the family cotton farm in Texas. After serving his country in the Army Air Corps during World War II, J.L. returned to Texas where he spent the next 35 years cotton farming. In 1983, J.L and Annette moved to Bartlesville. They relocated to Tulsa, where he worked for several years as a currier. They then moved to Beggs prior to moving to Okmulgee. He was a member and Deacon of the First Baptist Church of Beggs. J.L. enjoyed reading, especially the Bible. He cherished the time he was able to spend with his children and grandchildren. J.L. was preceded in death by his parents, wife, five brothers and two sisters. Survivors include his son, James Lynn Jones of Abilene, Texas; his daughter, Mary Jones Robbins and husband Greg of Okmulgee, Oklahoma; his son, Stephen Carl Jones and wife Tracy, of Broken Arrow, Oklahoma; He is also survived by twelve grandchildren, thirteen great grandchildren and many other friends and family. A service to celebrate J.L.'s life will be held at 11:00 A.M., Saturday, July 16, 2016, at the First Baptist Church in Beggs, 110 West Fifth, Beggs, Oklahoma. Interment will be at the Ft. Gibson National Cemetery at a later date. Arrangements and cremation services have been entrusted to the McClendon-Winters Funeral Home of Okmulgee. Memories, condolences, photos and videos may be shared with the family on J.L’s Tribute Page of our website at www.mcclendon-winters.com

James L. "J.L." Jones of Okmulgee, Oklahoma and formerly of Beggs and Seminole, Texas passed away June 28, 2016 in Broken Arrow at 94 years of age. J.L. was born August 28, 1921 in Limestone County, Texas, to the late Ruben LaFayette and Mary... View Obituary & Service Information

The family of James L. "J.L." Jones created this Life Tributes page to make it easy to share your memories.