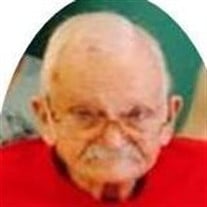 James "Jim" Monroe Smith 82, a resident of Okmulgee, passed away on Sunday, February 5, 2017 at Rebold Manor Nursing Home. James was born March 28, 1934 in Hugo Oklahoma to Lonnie and Faye Bohannon Smith. He attended school at Arizona State University and was a Civil Service Engineer working for the Public and Federal Highway System till his retirement in the early 90's. Jim enjoyed weight lifting, martial arts, reading the bible, listening to sports on the radio and walking to Wal-Mart. Jim was a member of Feed the Children organization and the Cornerstone Foursquare Church in Okmulgee. He is preceded in death by his parents and his best friend, Carl Harbison. Jim is survived by a sister, Norma Smith of Henryetta; Nieces, Sharon and Julie and a Nephew, Stephen, along with several great nieces and nephews. Funeral services for Jim will be held on Thursday, February 9, 2017 at 2:00 P.M. at the Cornerstone Foursquare Church, 617 N. Oklahoma in Okmulgee with Reverend Mickey Baldwin officiating. Interment will follow at the Okmulgee Cemetery. Casketbearers will be Tige Haynes, Eric Rolen, Terry Sellers, Joe Blair, A.J. Ash and Josh Lopez. Honorary Casket Bearers will be Bob Brown, Harlan Stensaas, JimEd BlueJacket, Reverend Jim Birch and Mike Kellogee. Friends may visit the funeral home for viewing on Wednesday, February 8, 2017 from 12 p.m. till 8 p.m. Arrangements have been entrusted to the McClendon-Winters Funeral Home of Okmulgee. For those that are unable to attend the service on Thursday, the church is having a "Friend Day" on Sunday, February 19th at 10:30 a.m. to honor the life of James. A dinner and fellowship will follow the service. Memorial contributions in honor of Jim may be made to Cornerstone's Building Fund and Peru Missions venture.

The family of James "Jim" Smith created this Life Tributes page to make it easy to share your memories.

James &quot;Jim&quot; Monroe Smith 82, a resident of Okmulgee, passed away...