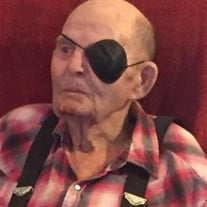 James W. Gleason was born March 16, 1929 in Beggs to the late James P. and Grace (Tabor) Gleason. He passed away on Sunday, January 19, 2020. James was a United States Army Veteran. He enjoyed being outdoors and loved to fish. He was a master at playing Horseshoes, and enjoyed shooting a game of pool or playing dominoes. James was a big fan of OU sports and would claim his spot at the Beggs Football games on Friday nights. James graduated from Beggs High School and attended Connors State College. After college he went directly into the Army, serving in the Korean Conflict. After his return home he began his 42 year career working at Thompson Ranch. He married Eva Faye in Okmulgee, on February 28, 1953. After his retirement, James worked part-time at Beggs Public Schools as a grounds keeper. He was a man that liked to stay busy and had a great work ethic. James built a backstop in their front yard so he, his children, and other family could play baseball. He was a family man, and spending time with his wife and family was what he enjoyed the most. Preceding James in death are his parents, a son Jerry, and a sister Elva Keller. Those left to cherish all of the great memories are his wife of 66 years, Eva Faye, son Rex and Celia Gleason of Beggs, daughter Claudia & Mike Lee of Beggs, son J.R. and Sue Gleason of Okmulgee, daughter Gwen & John Dodd of Beggs, a sister Juanita Thompson of Beggs, grandchildren Glen Duck , Danielle Brigance, Adam Dodd all of Beggs, Lisa Eshenour of Broken Arrow, Kristen Story of Twin Hills, James Dodd of Tulsa, Zachary Lee of San Antonio and 12 great-grandchildren. Friends may visit the McClendon-Winters Funeral Home of Beggs on Tuesday, January 21, 2020 from 1:00 P.M. to 8:00 P.M. The funeral service will be held at 2:00 P.M., Wednesday, January 22, 2020 at The Church of Christ with James Hamilton officiating. Interment will follow in the Beggs Cemetery. Memories, condolences, photos and videos may be shared with the family on James’ Tribute Page of our website at www.mcclendon-winters.com

James W. Gleason was born March 16, 1929 in Beggs to the late James P. and Grace (Tabor) Gleason. He passed away on Sunday, January 19, 2020. James was a United States Army Veteran. He enjoyed being outdoors and loved to fish. He was a master... View Obituary & Service Information

The family of James Gleason created this Life Tributes page to make it easy to share your memories.