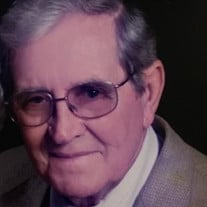 Jack Tyree, Jr. completed his life’s journey and entered his heavenly home on Monday, July 19, 2021, in Tulsa, Oklahoma. He was born to Jack Tyree, Sr., and Lilly (Berryman) Tyree on November 17, 1926, in Roff, Oklahoma. Jack served in the United States Navy, entering into service in San Diego, CA, then to the Naval Air Station at Barber’s Point in Hawaii, where he received a Victory Medal from his time in World War II. Jack married Virginia Oliver on Easter Sunday, April 6, 1947, in Ada, OK. Their union brought into this world three children. Jack worked in banking and in the automotive industry, which was his greatest interest. He co-owned the Watson-Tyree Buick dealership in the late 1950’s in Seminole, OK. In the 1960’s he became the new car sales manager of Jim Click Chevrolet, Altus, OK. He owned his second dealership, Jack Tyree Chevrolet, Holdenville, OK in 1975 and in the late 1980’s worked for Harlan Ford Motor Company, in Okmulgee, OK for a number of years before his retirement. Jack was very active in the community serving the Kiwanis, Lions club, Okmulgee Chamber of Commerce, and the American Legion. A faithful follower of Jesus Christ since he was 13 years old, Jack was a dedicated member of Gideon’s International and First Baptist Church, serving many years as Sunday school teacher, Department Head, and Deacon. Jack was a true sports fan, and a die-hard supporter of all Oklahoma Sooners sports, but especially OU football, baseball, basketball, golf, and women’s softball. He was an avid golfer and fisherman since his childhood. He spent the last 30 years playing the Henryetta golf course with his sons, Barry and Phil, son-in-law, Dave Wendt, and golfing partners Estle Smith, Marshall Spence, and Pat and Jack Willis. In celebration of Jack’s 90th birthday, his children held a golf invitational for his friends and family at the Henryetta golf course. Jack enjoyed fishing all of his life. While living in Seminole during the 1950's he made regular fishing trips to Lake Texoma with his good friend and fishing partner Byron Stackhouse. After moving back to Ada in 1960, he spent many Saturday afternoons fishing with an old friend from his school days, Bill Miles. They fished many of the clear, cold, spring fed lakes around Ada in their float tubes. Jack moved to Altus in southwest OK in 1962 where he began fishing with a new friend, R. L. Mitchell. Mitch and he fished together for many years and always enjoyed a friendly competition for who could catch the largest bass during each outing. Through the years, Jack also fished often with both sons, Barry and Phil, and son-in-law Dave. Ever active, three weeks before his death, Jack was fishing Okmulgee Lake, and he played his final round of golf in Henryetta on Father’s Day. Jack is preceded in death by his parents Jack and Lilly Tyree, and his beloved wife of 67 years, Virginia. He is survived by his sons Barry Tyree of Petersburg, IL; Dr. Phil and wife Kay Tyree of Hot Springs Village, AR; daughter Ginger and husband David Wendt of Grove, OK; sisters Wanda Osborn, Jonne Stewart and husband Wendell, and Louise Lau, sister-in-laws Tommie Oliver and Phyllis (Bill) Burchfiel, two grandsons, Michael and Mark Tyree, their spouses, two granddaughters, Harrison Tyree and Erin (Tyree) Christenson, their spouses; and eight great-grandchildren. They, will all dearly miss their Dad, Brother “Skeezix” and “Daddy Jack”, and along with the dear caregiver of both Virginia and Jack, Linda Van Meter, celebrate his long and active life! Visitation was Thursday, July 22, 2021, at McClendon-Winters Funeral Home Chapel from 1 P.M. to 6:00 P.M. with family greeting friends from 4:00 P.M. to 6:00 P.M. Memorial Service for Jack will be held Saturday, August 21, 2021, at First Baptist Church at 2:00 P.M. with Dr. Dennis Taylor and Reverend James Robinson officiating. In lieu of flowers donations can be made to Gideons International. Arrangements have been entrusted to the McClendon-Winters Funeral Home of Okmulgee. Memories, condolences, photos and videos may be shared with the family on Jack 's Tribute Page of our website at www.mcclendon-winters.com

The family of Jack Tyree Jr. created this Life Tributes page to make it easy to share your memories.

Jack Tyree, Jr. completed his life’s journey and entered his...