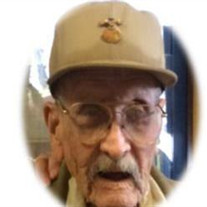 Jack Keith Landis passed away Friday, February 24, 2017 at 90 years of age. Jack was born on Monday, October 11, 1926 to the late Harry and Ester (McDonald) Landis in St. Louis, Missouri. He was an avid collector of Military and Japanese memorabilia and decorated his house with it, as well as bought, sold, and negotiated for items throughout his life. He was a member of the Military Clubs in St. Louis and St. Charles, Missouri and if he could, he would attend any gun show within a 300 mile radius. Earlier in life Jack held an amateur radio license and enjoyed making friends all over the world. He was a wonderful dancer! Several friends and family members would attend annual military events and dance to the sound of the “Big Bands” held at a variety of airport hangers and military clubs. In the later part of his life, Jack moved from the big city to Okmulgee, Oklahoma and cherished the time he spent with his family and neighbors. He looked forward to his daily lunch trips to the Okmulgee Senior Center and going out to eat all around Okmulgee; each local restaurant knew his order to a tee. Preceding Jack in death were his parents, wife Marie Landis, and daughter Janet Tittel. Those left to cherish all the great memories are brothers Richard Landis (Kay), Alan Landis, and sister Louis Landis Dean (Gary), children Jeffrey Keith Landis (Kathy) of St. Peters, Missouri, Janet Lee Landis of St. Charles, Missouri, Jill Ann Landis (Dave) of Capitola, California, Marilyn Blackburn (Tom) of Oklahoma City, Oklahoma, Bonnie Wade of Okmulgee, Oklahoma, and Jackie Williams (Harry) of Yukon, Oklahoma. Jack also leaves twenty grandchildren, forty great grandchildren, and eight great, great grandchildren. Services for Jack will be held on 12:00 P.M., Monday February 27, 2017 at the Okmulgee Community Center. Arrangements and Cremation Services have been entrusted to McClendon-Winters Funeral Home of Okmulgee.

Jack Keith Landis passed away Friday, February 24, 2017 at 90 years of age. Jack was born on Monday, October 11, 1926 to the late Harry and Ester (McDonald) Landis in St. Louis, Missouri. He was an avid collector of Military and Japanese memorabilia... View Obituary & Service Information

The family of Jack Keith Landis created this Life Tributes page to make it easy to share your memories.