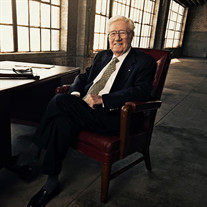 Jack Clinton Harlan died on Thursday, July 1, 2021, at his home in Okmulgee. Jack was born on September 18, 1924, in Clarksville, Arkansas, the only child of Kathleen Carl and Jackson Smith Harlan. Jack grew up in Prairie Grove, AR and after graduation from Prairie Grove High School, enlisted in the US Army Corps, serving as a 1st Lieutenant. Jack was a navigator, flying in B-17 bombers in Europe throughout World War 2. After his service, Jack attended the University of Arkansas, on the GI Bill and graduated in 1950 with a Bachelor of Science in Business, the same year he married Margaret Jean Collier. As young boys, growing up in Prairie Grove, Arkansas, Jack, and Glenn Fidler always dreamed of being in the automobile business. In the fall of 1951, they learned of an opportunity in Okmulgee. They visited House-Evans Lincoln Mercury and with handshakes, secured a loan from First National Bank and a week later, moved to Okmulgee with their wives to establish Fidler-Harlan Motor Company at 6th and Muskogee in Downtown. Jack and Glenn worked together until their retirement in the early 1980’s, serving second and third generations of families with their automobile needs. For nearly 30 years, they shared a desk and worked together (without any type of written agreement), became part of the Okmulgee business community and established life-long friendships, raised family and fulfilled their childhood dreams. Jack served on the Board of Directors of First National Bank of Okmulgee for 53 years. He gave back to the community serving on the boards of the Okmulgee Memorial Hospital, Okmulgee Jaycees, Okmulgee Chamber of Commerce, First United Methodist Church and First Presbyterian Church. Jack was a 70+ year member of the Okmulgee Masonic Lodge #199, the Okmulgee Bedouin Shrine and a member of the Royal Order of Jesters. In retirement, the Fidler’s and Harlan’s delivered Meals on Wheels together every Thursday for many years and enjoyed RV travel across the US and Canada, spending summers for many years in Estes Park, Colorado. Jack will be remembered for his smile and contagious laugh, his impeccable manners, his taste in clothes, his jitterbug and swing dance talent and a good scotch whiskey, shared in the company of family and good friends. Jack was preceded in death by Margaret Jean “Sis” Collier and Alice Riggs Shirley. Jack was loved and cared for in his home until his death by Mary Ann Dean, Suzy Davis, Sarah Sier and Amber Niscior. He is survived by children, Fred and Kellie Harlan, Mary Harlan Lewellen and Margaret and Rob Hess, all of Okmulgee, along with grandchildren, Andrew Harlan, Maggie and Brent Bailey, Jackson and Kelcey Hess, Alex Hess and Mark Hess and great grandson, Mason Bailey. A celebration of Jack’s life will be held on Monday, July 5, 2021, at 11am at the First Presbyterian Church of Okmulgee, with Rev. Jerry Fielder and Dan Sulivant presiding. In lieu of flowers, the family requests that memorials be made to Okmulgee Main Street or First Presbyterian Church of Okmulgee. Arrangements have been entrusted to the McClendon-Winters Funeral Home of Okmulgee.

Jack Clinton Harlan died on Thursday, July 1, 2021, at his home in Okmulgee. Jack was born on September 18, 1924, in Clarksville, Arkansas, the only child of Kathleen Carl and Jackson Smith Harlan. Jack grew up in Prairie Grove, AR and after... View Obituary & Service Information

The family of Jack C. Harlan created this Life Tributes page to make it easy to share your memories.