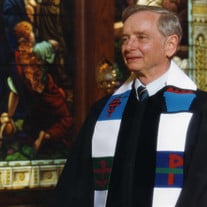 The Reverend J, Rodgers Spencer, 90 of Okmulgee, Oklahoma, died December 23, 2019 surrounded by family. He was born on February 21, 1929, in Cincinnati, Ohio the son of the late Raymond and Lysle Tieman Spencer. He was the younger of 2 siblings. On June 20, 1958, he married Jeannine Fiori, who survives. They had twin sons J. Morris and C. Rodgers. Mr. Spencer attended The University of Cincinnati and received his Bachelor of Arts degree from the College of Wooster, Ohio. He continued his education at McCormick Theological Seminary in Chicago and earned a Master of Divinity degree. Mr. Spencer was ordained to the ministry by the Cincinnati Presbytery in May 1954 and served churches in Fayetteville, Indiana; Washington, Pa; Warren, Ohio; El Paso, Texas, and Okmulgee, Oklahoma. He retired as full time pastor in 1994 after 40 years, but continued to serve churches as interim pastor and preacher when needed. He continued to serve the church at large by serving on committees in Presbytery and in Oklahoma. Both during his ministry and during retirement he volunteered in the community as well. He was an active member of the Ministerial Alliance serving as president for three years; helped form Friends of the Library, was treasurer of the hospital Auxiliary, volunteered in the Creek House Museum, served on boards of “Y”, United Fund, Rotary, and Okmulgee County Disaster. He was instrumental in selecting the historical pictures hanging in the library and putting together a book of the history of Okmulgee. Mr. Spencer is also survived by his son and daughter-in-law, C. Rodgers and Pam Spencer of Crossville, TN, grandchildren Anthony Spencer, Carrie Spencer, Karen Fehner, Keith Spencer and Kyle Spencer, along with several great grandchildren and great great grandchildren. He was preceded in death by his parents, his sister and son J. Morris. A service,” A Witness to the Resurrection” celebrating the life of John Rodgers Spencer will be held on Saturday at 3:00 P M. in the First Presbyterian Church, Okmulgee, Oklahoma. Arrangement and cremation services have been entrusted to the McClendon-Winters Funeral Home of Okmulgee.

The Reverend J, Rodgers Spencer, 90 of Okmulgee, Oklahoma, died December 23, 2019 surrounded by family. He was born on February 21, 1929, in Cincinnati, Ohio the son of the late Raymond and Lysle Tieman Spencer. He was the younger of 2 siblings.... View Obituary & Service Information

The family of Rev.J. Rodgers Spencer created this Life Tributes page to make it easy to share your memories.