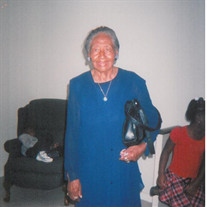 Izola Irene Antwine was born on December 24, 1920 to Sallie Christmas and Jewel Antwine at Nuyaka, Oklahoma. She departed this life on April 2, 2017 in Oklahoma City. She was raised and attended school in Beggs, Oklahoma. She met and later married Lantis Franks on March 2, 1942. To this union were born four children. They established their home and raised their children in Beggs. Lantis preceded her in death on October 2, 1986. In later years, she met and married Epton Daniels who preceded her in death in January 2000. Izola is survived by her four children Roscoe D. Franks (Connie) of Okmulgee, Oklahoma, Doretha I. Caine (John) of Oklahoma City,Oklahoma, Lonell L. Franks (Kaye) of Tulsa, Oklahoma, and Lantis Franks, Jr of Spencer Oklahoma. Also mourning her loss are her two brothers Schafter Antwine of Spencer, Oklahoma, and Willie Antwine, Sr. (Irene) of Okmulgee, sister-in-law Willie Mae Antwine of Beggs, Oklahoma. She leaves seven grandchildren, numerous great grandchildren, nieces, nephews, cousins, and dear friends. A funeral service for Izola will be held 11:00 A.M. Saturday, April 8, 2017 at the First Baptist Church South in Beggs, Oklahoma with Reverend Raymond D. Tucker officiating. Interment will follow at the New Post Oak Cemetery in Beggs, Oklahoma. Pallbearers will be Wesley Antwine, Chris Antwine, Bryant Antwine, Rodney Demery, John Antwine, and David Antwine. Honorary pallbearers will be Isaiah Antwine, Allen Antwine, Schafter Antwine, Jr., Noble Antwine, and Thomas Williams. Viewing will at the funeral home on Friday, April 7, 2017 from 12:00 P.M. until 8:00 P.M. and at the church on Saturday beginning one hour before the service. Arrangements have been entrusted to the McClendon-Winters Funeral Home of Beggs. Memories, condolences, photos and videos may be shared with the family on Izola’s Tribute Page of our website at www.mcclendon-winters.com

Izola Irene Antwine was born on December 24, 1920 to Sallie Christmas and Jewel Antwine at Nuyaka, Oklahoma. She departed this life on April 2, 2017 in Oklahoma City. She was raised and attended school in Beggs, Oklahoma. She met and later... View Obituary & Service Information

The family of Izola Irene Franks created this Life Tributes page to make it easy to share your memories.

Izola Irene Antwine was born on December 24, 1920 to Sallie Christmas...