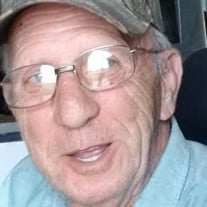 Hubert "Hugh" Grant Garrison, a resident of Morris passed away Thursday July 18, 2019. He was born to the late Julius and Lois (Bridgemon) Garrison on January 18, 1942 in Haleyville, Alabama. After retiring from a long career with Ingersol-Rand, he then became a prominent business owner of Quality Machine & Manufacturing and Wonder Waffle in Okmulgee for many years. Hubert was a member of the Elks. He is preceded in death by his parents, his beloved wife and best friend Francis Jeanette (Carney) Garrison, and an infant brother Foye Garrison. Those left to cherish the memories of Hugh are his brothers, Harold Garrison and wife Nelda of Lynn, Alabama, Coye Garrison and wife Margaret of Sturgis, Kentucky, Steve Garrison and his wife Brenda of Hamilton, Alabama, Gerald "Joe" Garrison of Haleyville, Alabama, sister Betty Reynolds of Haleyville, Alabama, his son Chris Garrison and wife Melissa of Henryetta, his daughter Debbie Ridge of Tulsa, daughter-in-law Lisa Lawson Gilroy and husband Jody of Morris, son Jr Richel of Morris. He also leaves behind ten grandchildren, Trista Love of Okmulgee, Devon Sanford of Beardsley, Minnesota, Kristin Gilroy of Morris, Devon Garrison of Henryetta, Zach and Mya Powders of Henryetta, Riley Floyd of Henryetta, Melanie Moore of Okmulgee, Tiffany Ellis of Tulsa, and Brandi Morris and husband Jeff of Union City, Tennessee, along with numerous great grandchildren, great-great grandchildren, and his wonderful caretaker Lynn Hogan. A funeral service for Hubert will be held 10:00 am Tuesday, July 23, 2019 at McClendon-Winters Funeral Home Chapel in Okmulgee with Reverend Ray Moffeit officiating. Interment will follow at the Okmulgee Cemetery. A viewing will be held for Mr. Garrison at the McClendon-Winters Funeral Home Chapel in Okmulgee Monday, July 22, 2019 from 1:00 pm-8:00 pm Arrangements have been entrusted to the McClendon-Winters Funeral Home of Okmulgee.

Hubert "Hugh" Grant Garrison, a resident of Morris passed away Thursday July 18, 2019. He was born to the late Julius and Lois (Bridgemon) Garrison on January 18, 1942 in Haleyville, Alabama. After retiring from a long career with Ingersol-Rand,... View Obituary & Service Information

The family of Hubert "Hugh" Grant Garrison created this Life Tributes page to make it easy to share your memories.

Hubert &quot;Hugh&quot; Grant Garrison, a resident of Morris passed away...