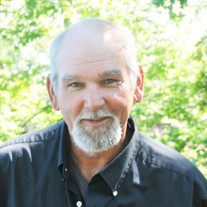 Howard “Howie” Andrew Branson, beloved husband, son, father, brother and papa, passed away Wednesday evening, August 16, 2017 in Okmulgee at 55 years of age. He was born September 8, 1961 in Tulsa to Barry Gene and Rita (Vonier) Branson. Howie graduated from Beggs High School in 1979 and attended NEO A&M College in Miami. He married Jenny Baldridge on March 22, 1980 at the Beggs First United Methodist Church. Howie drove a truck for his brother Jack at Cotton’s Trucking for over 15 years. He enjoyed coaching baseball and loved spending time with his grandkids. He was preceded in death by his father, a sister, Loretta May Branson and infant brother, Arthur Branson. Survivors include his wife, Jenny Branson, of the home, mother, Rita Branson of Beggs, children, Larry Branson and wife Sarah of Sand Springs, Jennifer Branson of Beggs and Patrick Branson and wife Keesha of Beggs, brothers, Barry Branson and wife Cindy of Skiatook, Jack Branson and wife Melissa of Beggs, Richard Branson and wife Kathy of Sand Springs and John Branson and wife Carrie of Tulsa, grandchildren, Erica, Peyton, Mika, Mack and Maverick, a brother-in-law, Mike Whittenburg, special friends, Sandra and Jimmy Howell and numerous nieces and nephews. Howie will be remembered as the hardest worker ever and an all-around go to man. Friends may visit the funeral home on Sunday, August 20, 2017 from 12:00 P.M. – 6:00 P.M. The family will be present to greet friends from 4:00 P.M. – 6:00 P.M. A funeral service will be held 10:00 A.M., Monday, August 21, 2017 at the Crossroads Baptist Church of Beggs with Reverend Jarrod Kendall officiating. Interment will follow in the Beggs Cemetery. Arrangements have been entrusted to the McClendon-Winters Funeral Home of Beggs. Memories, condolences, photos and videos may be shared with the family on Howie’s Tribute Page of our website at www.mcclendon-winters.com

The family of Howard "Howie" Andrew Branson created this Life Tributes page to make it easy to share your memories.