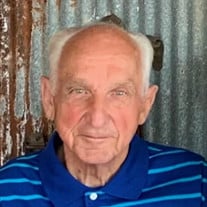 Glenn Ray Bohuslavicky was born in Centerview, Oklahoma to Robert and Rachel Bohuslavicky on December 31, 1943. He passed from this life on June 19th at 77 years old. He lived most of his life in Okmulgee, Oklahoma. He married the love of his life Joyce on January 30, 1965. Glenn is survived by his wife, Joyce; three daughters, Glenda Bohuslavicky, Laura and husband Frankie Rodriquez, and Misty Bohuslavicky.; four grandsons, Ryan Haynes, Andy Haynes, Zach Rodriquez and Jordan Rodriquez; his favorite granddaughter, Ashley Haynes; four great grandchildren, Rj Haynes, Colby Haynes, Clement Rodriquez, and his favorite great granddaughter Caylee Haynes; his sister, Mary Fulton of Oklahoma City; and a host of nieces and nephews. Glenn retired from the Army where he served our country for 30 years. He worked in the insurance business for 38 years and was known all over town as the insurance man or Bo. Proceeding Glenn in death are his parents, Robert and Rachel Bohuslavicky; his three brothers, Edward, Richard John Oliver (J.O.) and Bob; and his two sisters, Josephine and Anna. Glenn was an avid OU fan. On game day you would find him in the stands with his daughters Glenda and Laura and grandchildren. Football season was interesting around the Bohuslavicky residence because his wife Joyce is a Texas Longhorns fan. He was also a huge Okmulgee Bulldog supporter; he and Misty Bo rarely missed the bulldogs play even long after all the grand kids graduated and moved on. Glenn was a member of Grovania Free Will Baptist church for over 40 years where he was a Deacon and taught Sunday School. He enjoyed his daily walks and visits around the Okmulgee community. He never met a stranger and always had a kind word and smile. Glenn will be missed by all who knew him. At Glenn’s request his grandsons and great grandsons have the honor of carrying his casket. Glenn has never called them by their name. He gave them all the nickname of Rocky. Ryan, Zach, Andy, Jordan, RJ, Colby Friends may visit the funeral home on Friday evening from 5:00P.M. – 8:00 P.M. with the family present to receive friends from 5:00 P.M. – 7:00 P.M. A funeral service will be held 2:00 P.M. Saturday, June 26, 2021 at the McClendon-Winters Funeral Home Chapel with Reverend Thomas Jamison officiating. Interment will follow at the Beggs Cemetery where Military Honors will be conducted. A reception will follow at the McClendon-Winters Life Celebration Center in Okmulgee. Arrangements have been entrusted to the McClendon-Winters Funeral Home of Okmulgee. Memories, condolences, photos and videos may be shared with the family on Glenn 's Tribute Page of our website at www.mcclendon-winters.com

Glenn Ray Bohuslavicky was born in Centerview, Oklahoma to Robert and Rachel Bohuslavicky on December 31, 1943. He passed from this life on June 19th at 77 years old. He lived most of his life in Okmulgee, Oklahoma. He married the love of... View Obituary & Service Information

The family of Glenn Ray Bohuslavicky created this Life Tributes page to make it easy to share your memories.

Glenn Ray Bohuslavicky was born in Centerview, Oklahoma to Robert...