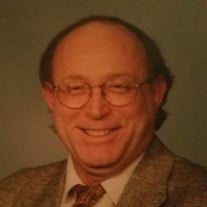 George Melvin "Lee" Jones, Jr. passed away on Saturday, November 18, 2017 at the age of 65 in Morris, Oklahoma. Lee was born to the late George Melvin Jones and Dolores (Young) Rose in Fresco, California on Friday, March 21, 1952. Lee joined the United State Army in 1969 and was stationed in Germany during the Vietnam War. He was always up for learning new things. Lee had a garden growing grapes to start his very own wine vineyard. He enjoyed working on electronics and writing software. He loved to communicate on his two meter radio that would broad cast around the world. On warm, sunny days Lee would take his motorcycle out for a joyride and go out and play on his tractor. What he loved most was spending time with his grandkids, whether it was taking them on a trip in his travel tailor or playing video games. Preceding Lee in death are his parents, sister Sharon Borton, brother Johnny Rose, step father Manuel Rose, and dog Socrates. Left to cherish the memories of Lee is his daughter Sheri Conover and husband Loyd of Morris, grandchildren Joshua Cooper and wife Lindsey of Oklahoma City, Mitchel Runnels of Tulsa, Lisa Wood and husband Brycen of Glenpool, Jason Clark and wife Rachel of Tulsa, Shanley Hunter of Virginia, Mykah, Piper and Paige Coughran of Morris, great grandchildren Adycen Wood, Italy Wood, Alysana Wood, and Jack Clark, sisters Wanda Soder and Patty Baldwin of Utah and a host of nieces and nephews. A Funeral Service for Lee will be held 10:00 A.M. Wednesday, November 22, 2017 at the McClendon-Winters Funeral Home Chapel with Bishop Jack Ramsey officiating. Interment will follow at the Okmulgee Cemetery. Pallbearers will be Joshua Cooper, Mitchel Runnels, Jason Clark, Loyd Conover, Jack Ramsey, and Brett Winters. Honorary Pallbearers will be Steven Deahl and Michael Park. Arrangements have been entrusted to the McClendon-Winters Funeral Home of Okmulgee.

The family of George Melvin Jones Jr. created this Life Tributes page to make it easy to share your memories.