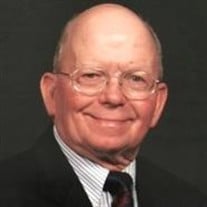 Fred William Landgraf, 81 a member of the Prairie Bell Community, in Okmulgee, Oklahoma, passed away peacefully in his sleep, March 8, 2017, in Okmulgee. Fred was born in Cape Girardeau, Missouri on April 29, 1935, to Arthur Ernest and Marie Bertha (Eifert) Landgraf. He attended Cape Girardeau High School and later attended Oklahoma State Technical College, where he graduated with an Associates of Arts Degree in Agriculture. Fred raised chickens and sold eggs to many local grocery stores in Okmulgee. He also sold eggs to many friends and neighbors. After closing his egg business, he went to work at Oklahoma State University Technical College. He worked in the Ground Maintenance Department for 22+ years. He retired in 2001 as Ground Maintenance Supervisor at OSU TECH. He received an A Standard of Excellence Employee Award in 1992. This award was treasured by Fred, since employees voted who should receive it every year. He was a member of Trinity Lutheran Church. He served Trinity as an officer, a choir member and many other areas of the church. He married his wife Ruth Lillian Bogie Deem at Trinity, on August 25, 1991. Fred enjoyed spending time with his family, he is survived by his wife Ruth Landgraf; and step-children Lisa Cline (Tom), Eric Deem, Anita Allen, and seven grandchildren and two great-grandchildren; his sister Lida Mueller of Brenham, Texas; and brother Jim Landgraf of Scott City, Missouri; nephews Tom Mueller (Pam) of Katy, Texas, and Jeff Mueller of Fort Gibson, Oklahoma; three great-nephews and one great-niece. Visitation will be held Sunday at 2:00 p.m-6:00 p.m. McClendon-Winters Funeral Home 303 East 7th Street, Okmulgee, Oklahoma. Service of Christian Burial will be celebrated at 1:00 p. m. on Monday, March 13th at Trinity Lutheran Church, 1314 East Sixth Street, Okmulgee, Oklahoma. Pastor Christian C. Tiews of Trinity Lutheran Church will officiate. Memorial contributions may be made in Fred Landgraf’s name to “Trinity Lutheran Church”, Okmulgee, Oklahoma. Arrangements have been entrusted to the McClendon-Winters Funeral Home of Okmulgee. Memories, condolences, photos and videos may be shared with the family on Fred Landgraf’s Tribute Page of our website at www.mcclendon-winters.com

Fred William Landgraf, 81 a member of the Prairie Bell Community, in Okmulgee, Oklahoma, passed away peacefully in his sleep, March 8, 2017, in Okmulgee. Fred was born in Cape Girardeau, Missouri on April 29, 1935, to Arthur Ernest and Marie... View Obituary & Service Information

The family of Fred Landgraf created this Life Tributes page to make it easy to share your memories.

Fred William Landgraf, 81 a member of the Prairie Bell Community,...