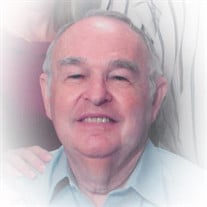 Forrest Loren Bendure was born August 30, 1930 two and one half miles east of Ripley, Oklahoma to the late Loren George and Lillie Mae (Groves) Bendure. He started grade school in Ripley and in 1942 the family moved to Piqua, Ohio, where his father was employed at Lear Avia Defense Plant. In the summer of 1945, the family returned to Oklahoma, settling in Stroud. Forrest graduated from Stroud High School in 1949 and January 4, 1951 he enlisted in the United States Air Force. Forrest served four years, three of which were in Germany. He obtained the rank of Staff Sergeant. Upon his discharge, his family was living in Blackwell, Oklahoma. Forrest met Delores Jeanette Seymour in June of 1954 and they were wed on August 23, 1955 at the Seymour Family Farm House. He worked as a mechanic for Turnage Pontiac in Blackwell until August 1956 when he was hired at Tinker Air Force Base. He retired August 30, 1985. Forrest was an amazing carpenter and talented watch and clock repairman. He took great pride in remodeling and making his home perfect for his family. He was a faithful member of Crest Baptist Church in Midwest City where he and his family resided for many years. Forrest passed away with his family at his side, on Saturday, January 29, 2022 at the age of ninety-one. Preceding Forrest in death were his parents, wife, Delores, brothers, Bob and Douglas Bendure, a sister, Patsy Troxell and a son-in-law, Jerry Harrell. Survivors include two daughters, Linda Lee Harrell and Donna Jean Prior and husband Johnny, grandchildren, Cameron Harrell and Courtney Fertic and husband Logan and numerous nieces and nephews. Viewing and Visitation will begin at 10:00 A.M., Saturday, February 5, 2022 at the Crest Baptist Church in Midwest City. A funeral service will follow at 11:00 A.M. with Pastor Rick Whipple officiating. Interment will be in the Arlington Memory Gardens. Casket bearers will be John Prior, Cameron Harrell, Logan Fertic, Mike McCaslin, Derek Czajkoski and Roger Boulware.

Forrest Loren Bendure was born August 30, 1930 two and one half miles east of Ripley, Oklahoma to the late Loren George and Lillie Mae (Groves) Bendure. He started grade school in Ripley and in 1942 the family moved to Piqua, Ohio, where his... View Obituary & Service Information

The family of Forrest Loren Bendure created this Life Tributes page to make it easy to share your memories.