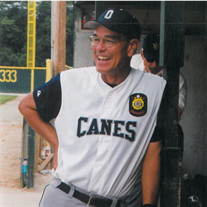 Floyd "Gene" Eugene Lewellen, 63 passed away on Thursday, December 29, 2016. He was born October 9, 1953 to Rex Lewellen and Yoneko Yamashita Lewellen in Albuquerque, New Mexico. Gene married Mary Harlan on April 1, 1988 in Tulsa, Oklahoma. Gene enjoyed baseball coaching and officiating, golf, and all kinds of sports. He was an avid reader. He was a member of OSSAA Officials Hall of Fame 2014. Gene was also a Rotarian and a member of the United Methodist Men. Preceding his death was his father, Rex. Left to cherish the memory of Gene is his wife, Mary of the home, daughters, Courtney Lewellen of Shawnee, Whitney Lewellen of Tulsa, son and wife, Eric and Steph Lewellen of Fort Mill, South Carolina, daughter and husband, Maggie and Brent Bailey of Okmulgee, mother, Yoneko Lewellen of Oklahoma City, brother, Terry Lewellen of Oklahoma City, and brother and wife, David and Patty Lewellen of Oklahoma City. He is also survived by grandchildren, Mason Bailey of Okmulgee, Ethan Gallagher of Tulsa, Maryl and Justin Lewellen of Shawnee and Charlotte and Audrey Lewellen of South Carolina. A memorial service for Gene will be held at 1:00 P.M. on Tuesday, January 3, 2017, at the First United Methodist Church of Okmulgee. Rev. Roland Youngberg will officiate. Honorary Pallbearers will be Brent Bailey, Andrew Harlan, Alex Hess, Jackson Hess, Mark Hess, Tyler Lewellen, Shane Lewellen, Harold Fox, Dave Gibson, Jered Jones, Daryl Maxville, Mike Sexton and Mat Wilson. Arrangements have been entrusted to the McClendon-Winters Funeral Home of Okmulgee. Memorial contributions may be made to the United Methodist Men of Okmulgee or Okmulgee Main Street. Memories, condolences, photos and videos may be shared with the family on Gene’s Tribute Page of our website at www.mcclendon-winters.com

The family of Floyd "Gene" Eugene Lewellen created this Life Tributes page to make it easy to share your memories.