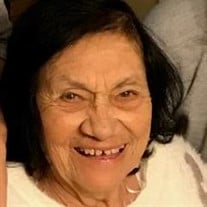 Esther Mae Holloway, born November 15, 1930 in Richardsville, Oklahoma. She was preceded in death by her husband Grady H. Holloway a WWII and Korean War Veteran and her daughter Konawv Jean Holloway, her mother Leona Mae Fox, and siblings Emerson McIntosh, Billy Joe Fox, and Charlie Newton. Esther is survived by her daughter Rebecca Torres and husband Bill McKee, son Eastman Richards Holloway and wife Brenda, brother Bill Richard, sister Nina Loftis, grandchildren Eastman Grady Holloway and Mia and Billy Hoskison, great-grandchildren Lola and Ava, nephews Tim Newton, Brad Fox, and Ned, Phillip, and Ty McIntosh, nieces Marcy Fox, De, Cindy, and Debbie McIntosh , and Tafv Braxton. Esther was a teacher most of her life. She taught at Cherokee N.C. and coached Girls Basketball. She taught at Muskogee Public Schools(A.R. and Saddler). She also taught at Bacone College and coached Girls Basketball. She had obtained 3 Masters Degrees from NSU and Texas Woman's University. She coached track and taught tennis. She was an encourager to the those who were experiencing hardships and relished in their success to endeavor. She was an advocate for her Mvskoke este cate community. She worked as a tribal consultant and grant writer with many tribes and would write proposals for their various needs. She was a proponent and advocate for the rights of indigenous people and lived her life as a strong Mvskoke wife, mother and grandmother. Many times our este cates would knock on the door for her and she would first ask if they were hungry and she always made time to help them. She exemplified our culture through her actions. She will be missed dearly by family and friends. Ecenokecvyet os and Hvtvm Cehecares A funeral service for Esther will be held 1:00 p.m. Friday, June 28, 2019 at Belvin Baptist Church in Okmulgee with Reverend Allan Colbert officiating. Friends may visit the funeral home on Thursday, June 27, 2019 from 1:00 pm until 8:00 pm. Join the family Thursday evening from 6:00 P.M. – 8:00 P.M. at the McClendon-Winters Funeral Home Chapel for Hymns and Prayers.

The family of Esther Mae Holloway created this Life Tributes page to make it easy to share your memories.