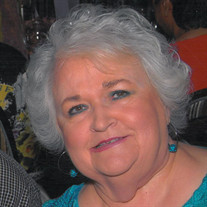 Emily Jane Simmons Hubbell was born September 16, 1943 in Rhome, Texas to the late Emma Jean Brown Simmons and Martin Ezra Simmons. She passed away at her Beggs residence on August 29, 2016 with her husband and daughter by her side. Jane learned to play the piano and organ at an early age, playing in church for revivals, weddings and funerals and accepted Christ at an early age. She married Bobby Wayne Hubbell on November 29, 1963 and together they had two beautiful daughters, Julie Lyn and Jill Annette. While living in Texas, Jane worked for the telephone company and later in the medical field until 1995, when her and Bobby retired to Beggs. She loved volunteering at Okmulgee Memorial Hospital, traveling with the Priority Club in Okmulgee, being in the B.A.L.L. Group at First Baptist Church of Okmulgee and being a Red Hatter. She was a member of Crossroads Baptist Church in Beggs. Jane was preceded in death by her parents and daughter, Jill. She is survived by her loving husband of 52 years, Bobby, daughter Julie Hubbell Van Noy of Frisco, Texas, grandson, Ben Ross of Crowley, Texas, her beloved Yorkie, Miss Pickles, two sisters, Virginia Read of Bella Vista, Arkansas and Imogene MeCaskey of Euless, Texas, a brother, Martin Simmons, Jr. of Tucson, Arizona and numerous nieces and nephews. Jane is also survived by her many friends that meant so much to her. A Service to Celebrate Jane's Life will be held 2:00 PM, Friday, September 2, 2016 at the Crossroads Baptist Church with Pastor Travis Markes officiating. Memorials may be made in Jane's memory to the Crossroads Baptist Church Parking Lot Fund. Arrangements and cremation services have been entrusted to the McClendon-Winters Funeral Home of Beggs. Memories, condolences, photos and videos may be shared with the family on Jane's Tribute Page of our website at www.mcclendon-winters.com

Emily Jane Simmons Hubbell was born September 16, 1943 in Rhome, Texas to the late Emma Jean Brown Simmons and Martin Ezra Simmons. She passed away at her Beggs residence on August 29, 2016 with her husband and daughter by her side. Jane... View Obituary & Service Information

The family of Emily Jane Hubbell created this Life Tributes page to make it easy to share your memories.