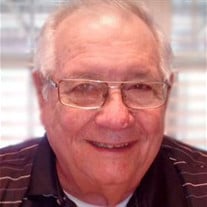 Eldon Gene Johnson, 84, of Beggs, Okla, peacefully passed away on August 10, 2017 in Tulsa, Okla. He was born in Balko, Okla., to Gus and Luella Johnson on April 30, 1933. He lived on a farm in Laverne, Okla., where he later graduated from Laverne High School. Eldon met his bride-to-be, Eva Louise Damron, in Woodward, Okla. They fell in love and were married on Feb. 21, 1953. Eldon served in the U.S. Army from 1954 to 1956. He was stationed in Tacoma, Washington, and later in Paris, France. He drove an Army ambulance while in France. After release from the Army, Eldon and Louise resided in Woodward, Okla. They raised 3 children, Rita, Ronda, and Chris. He was an active member in the Woodward Assembly of God and served as treasurer and deacon for many years. Eldon worked in the oilfield for Dresser Magcobar until 1974. He then began welding in his own shop for WW Manufacturing out of Dodge City. Over the years he had many projects including the set-up of the chutes and holding stalls at the National Finals Rodeo. When he retired, he and Louise became camp host for the U.S. Forest Service at River Hill, near Creede, Colorado. Later, the American Land and Leisure Company hired him to manage 8 different campgrounds near Creede. He enjoyed the campgrounds for 10 summers. He loved fishing and hunting and having his family and friends visit. In 2008, Eldon and Louise totally retired and moved to Beggs, Okla. They were active in the Beggs Assembly of God Church. Eldon enjoyed living out in the country, taking walks, and sitting on his deck. Eldon and Louise were married for over 62 years before she was called to heaven in 2014. He was preceded in death by his parents, Arlo Gustus and Luella Johnson, one sister, Leah Hoosier and two brothers, Verle and Dale Johnson. Eldon is survived by three children, Rita Jackson (Neal), Ronda Abbott (Blaine), and Chris Johnson (Lisa), seven grandchildren, Sarah Willis (Casey), Amanda Eitel (Ethan), Kaylen Ashford (Eddie), Haley Johnson, Cody Abbott, Kaia Hicks (Brad), and Jonathan Jackson, six great grandkids and many nieces and nephews. Funeral services will be held 1:00 P.M., Tuesday, August 15, 2017, at the Beggs Assembly of God Church with Reverend Robert Yandall officiating. Visitation is Monday, August 14, from 12:00 P.M. until 8:00 P.M. at the McClendon-Winters Funeral Home Chapel in Beggs. Family will be present from 6pm to 8pm. Arrangements are entrusted to the McClendon-Winters Funeral Home of Beggs, Okla.

Eldon Gene Johnson, 84, of Beggs, Okla, peacefully passed away on August 10, 2017 in Tulsa, Okla. He was born in Balko, Okla., to Gus and Luella Johnson on April 30, 1933. He lived on a farm in Laverne, Okla., where he later graduated from... View Obituary & Service Information

The family of Eldon Gene Johnson created this Life Tributes page to make it easy to share your memories.