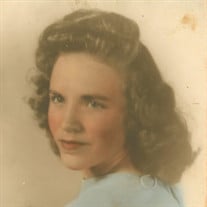 Dorothy Lee Titsworth was born September 4, 1928 in Fort Collins, Colorado to the late Charles E. and Mattie Mae (Taylor) Johnson. She passed away Wednesday, May 27, 2020 at her Okmulgee home surrounded by her family. Dorothy married Kenneth Ray Titsworth and they were married for 72 years. They lived in Van Buren Arkansas, California and back to Okmulgee. She was a member of the Second Baptist Church of Okmulgee where she had been active singing with the Silvertones. Kenneth and Dorothy made many mission trips to Mexico. She was also a member of the Rebekah Lodge. Dorothy loved her family dearly. She baked every day and enjoyed cooking for her family. Dorothy will be remembered for her patience and for being the best mom. She is preceded in death by her parents, sisters, Verna Vanderpool and Martha Gahagan, brother, Wayne Johnson, granddaughter, Melissa Wilson, and son-in-law, William Wilson. Survivors include her husband, Kenneth Titsworth I of the home, Daniel Titsworth and wife Carol of Virginia Beach, Virginia, Terry Titsworth and wife Donna of Okmulgee, Gloria Wilson of Henryetta, James Titsworth and wife Diane of Okmulgee, Kenneth Titsworth II and wife Darla of Waldron, Arkansas, Don Titsworth and wife Sue of Okmulgee, Kathy Taboada of Tennessee Colony, Texas and Jeremy Titsworth and spouse Chad Linley of Oklahoma City, two sisters, Margaret Dunn of Onalaska, Texas and Cora Swaney of Coffeyville, Oklahoma, grandchildren, Michael Wilson and wife Sara of Carthage, New York, Christopher Titsworth of Hayesville, Kansas, Daniel Tiesworth and wife Keriann Dryer of Richmond, Virginia, Jonathon Titsworth of Van Buren, Arkansas, Teresa Titsworth of Okmulgee, Rachel Swindell and husband Josh of Virginia Beach, Virginia, Donald Titsworth II and wife Liz of Denver, Colorado, Jennifer Taboada of Moore, Oklahoma, Anthony Titsworth and wife Tabitha of Okmulgee, Andrea Tarazon and husband Daniel of San Diego, California, Caitlin Titsworth of Virgina Beach, Virginia, Charity Titsworth, James Titsworth and Kenneth Titsworth, all of Waldron, Arkansas, and multiple great grandchildren and great great grandchildren including Zasha Taboada and Tristan Taboada of Moore. She is also survived numerous nieces and nephews. Services for Dorothy will be held at a later date. Arrangements and cremation services have been entrusted to the McClendon-Winters Funeral Home of Okmulgee. Memories, condolences, photos and videos may be shared with the family on Dorothy's Tribute Page of our website at www.mcclendon-winters.com

Dorothy Lee Titsworth was born September 4, 1928 in Fort Collins, Colorado to the late Charles E. and Mattie Mae (Taylor) Johnson. She passed away Wednesday, May 27, 2020 at her Okmulgee home surrounded by her family. Dorothy married Kenneth... View Obituary & Service Information

The family of Dorothy Lee Titsworth created this Life Tributes page to make it easy to share your memories.