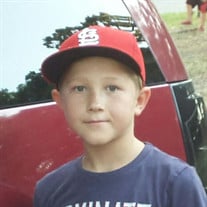 Dominic Ross Duclos was born December 22, 2008 in Tulsa to Andrew Thomas and Tori Ann (Beaver) Duclos. He passed away Sunday, September 3, 2017 at Okmulgee Lake. Domi was eight years old and a third grade student at Morris Elementary School. He loved fishing and hunting as well as playing games and reading on his tablet. Domi liked playing baseball and football. He was known for being able to analyze anything, was a great speller, was often described as “perfect” and was a friend to everyone. He attended the First Baptist Church of Morris. He was preceded in death by his great grandparents, Bob and Donna Ross and grandmother, Corinne Ann Duclos. Survivors include his parents, Drew and Tori Duclos, brothers, Andrew and Toby, grandparents, Mark and Linda Beaver and Steve and Mary Duclos, aunts and uncles, Toni Beaver, Tana Beaver and Jason Hawkins, Isaac and Aundy Duclos, Jonathan Duclos, Nathaniel and Carmon Duclos, Candice Wells and Nathan Wells and cousins, Halli and Nate Beaver, Drew, Kylie, Ashton and Natali Hawkins, Emma, Alex, Emerick, Yaniah and Kenyon Duclos and Kadon Wells. He is also survived by numerous other family and friends. Funeral services will be held 2:00 P.M. Tuesday, September 12, 2017 at the First Baptist Church of Morris with Reverend Ray Moffeit officiating. Interment will follow in the Morris Cemetery. Friends may visit the funeral home on Monday from 9:00 AM – 8:00 PM. In lieu of flowers the family ask for donations be made to the Morris Elementary Library. Arrangements have been entrusted to the McClendon-Winters Funeral Home of Okmulgee. Memories, condolences, photos and videos may be shared with the family on Dominic’s Tribute Page of our website at www.mcclendon-winters.com

The family of Dominic Ross Duclos created this Life Tributes page to make it easy to share your memories.