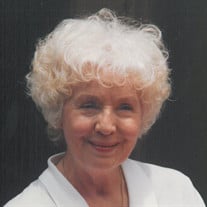 Dianne (Stewart) Burgess was born February 7, 1934 in Bartlesville, to the late Burrel and Ruby Marie (Johnston) Stewart. She passed away Saturday, December 21, 2019 in Tulsa at 85 years of age. Dianne attended Okmulgee High School. She worked for American Saint Gobain Glass Company for several years and later as a clerk for the Okmulgee County Health Department. As a single mother, Dianne was dedicated to raising and providing for her three sons. She was very devoted to her family and had been a caregiver for several of her loved ones. She could play the piano by ear and liked to sing. Dianne enjoyed weekends spent at the lake with her family and friends. She was an OU and Dallas Cowboys fan. She liked to cook for her family and was especially fond of chocolate. Dianne had resided at Plantation House for the past five years, where she fostered many new friendships. She will be remembered for her selfless ways and care for others. Dianne was preceded in death by her father, Burrel Stewart, mother, Ruby Marie White, husband, Lloyd Burgess and the father of her sons, Everett Rea, Jr. She is survived by her three sons, Everett Rea, III and wife Sandy, Tim Rea and wife Martha and Kevin Rea and wife Cheryl, grandchildren, Amanda Fowler and husband Mike, Alex Rea and wife Jasmin, Ashley Bruce and husband John and Andy Rea and wife Delaney, a brother, Dan Stewart, niece, Stephanie Woods, nephew, Spencer Stewart, four great grandchildren and a step-son, Roger Burgess. Friends may visit the funeral home on Thursday, December 26, 2019 from 2:00 P.M. – 8:00 P.M. and on Friday from 9:00 A.M. – 1:00 P.M. A funeral service will be held 2:00 P.M. Friday, December 27, 2019 at the McClendon-Winters Funeral Home Chapel with Reverend Tracy Hoskins officiating. Interment will follow in the Okmulgee Cemetery. Arrangements have been entrusted to the McClendon-Winters Funeral Home of Okmulgee. Memories, condolences, photos and videos may be shared with the family on Dianne's Tribute Page of our website at www.mcclendon-winters.com

The family of Dianne Burgess created this Life Tributes page to make it easy to share your memories.