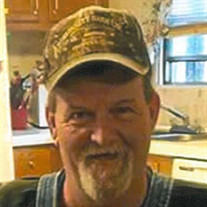 Dennis Floyd (Hoot) Sharp, age 55, of Haskell, passed away on Thursday, August 17, 2017. He was born on April 17, 1962 in Okmulgee to the late Charles Floyd and Bonniegene Sharp of Morris. He grew up in Morris and graduated from Morris in 1980. Hoot was a very talented man. He worked several years at Acme Brick and was a truck driver for Arrow Trucking for many years. He also drove for Kirk Tank Trucks and worked for several farmers around this area. He also mowed and bailed hay all over Okmulgee, Muskogee and McIntosh Counties. Hoot was part of several “Coffee Shops” including Country Corner, Okmulgee Ready Mix and the Donut Shop in Haskell. He was retired from the Morris Volunteer Fire Department and had been a Reserve Officer for the Okmulgee County Sheriff’s Office and the Morris Police Department. He was well known across Oklahoma and across the Country. He touched so many lives. Hoot is preceded in death by his dad, Floyd Sharp, a son, Dakota Sharp and a brother-in-law, Jerry David Robison. He is survived by his wife, Sheila Webb, of the home, son, Matthew Sharp and wife Jayme and their sons, Easton Lane and Peyton Matthew, son Darrel Sharp and his children, Blake, Kayla, Wyatt and Kerigan, all of Morris, mother, Bonniegene Sharp of Morris, step-children, Keri Beede, Terry Ginn and their son Lil’ Joe, Jason Beede and wife Laura and their son Jax all of Haskell, sister, Denise Robison and brother Curtis Sharp and wife Tina, all of Morris, brothers-in-law, Steve Webb and wife Tammy, Scott Webb, Terry Webb, Jim Webb and wife Kara, all of Haskell. He is also survived by many nieces, nephews, and many other family and friends. Friends may visit the funeral home on Sunday from 1:00 P.M.-6:00 P.M. and the family will be present from 2:00 P.M.-4:00 P.M. to greet friends. Funeral services for Hoot will be held 2:00 P.M. Monday, August 21, 2017 at the First Baptist Church of Morris with Brothers Donald Hogue, Jr. and Jeff Ward officiating. Interment will follow in the Morris Cemetery. Casketbearers will be Steve Webb, Scott Webb, Curtis Sharp, Kenny Hager, Joe May, Red Wiley and Billy Winsett. Honorary casketbearers will be John Roberts, Lannie Heston, Roger Barnett, Jeff Roth and Terry Ginn. Arrangements have been entrusted to the McClendon-Winters Funeral Home of Morris. Memories, condolences, photos and videos may be shared with the family on Hoot’s Tribute Page of our website at www.mcclendon-winters.com

Dennis Floyd (Hoot) Sharp, age 55, of Haskell, passed away on Thursday, August 17, 2017. He was born on April 17, 1962 in Okmulgee to the late Charles Floyd and Bonniegene Sharp of Morris. He grew up in Morris and graduated from Morris in 1980.... View Obituary & Service Information

The family of Dennis "Hoot" Floyd Sharp created this Life Tributes page to make it easy to share your memories.