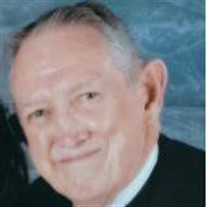 Davis Jackson Moore, age 85, died on Wednesday, November 14, 2018 at home with his wife by his side. His last moments were marked by visits from family and friends who adored him. From his birth in Tulsa, Oklahoma on March 9, 1933 to Zelma Thomas and Joseph Nolen Moore to his death on Wednesday, he created laughter and goodwill with everyone he met. He grew up in Oklahoma and earned a Political Science degree from the University of Oklahoma in 1956. He was always involved and interested in politics. Davis ran for State Senate and U.S Congress in Oklahoma. Davis had a great business and financial mind as well, building his own companies in insurance and later investments. Davis married Nana Lee Pitts from Okmulgee, Oklahoma in 1957. Together they had one daughter, Cathy. Davis and Nana stayed in Houston, Texas after Nana was diagnosed with ovarian cancer and received treatment at M D Anderson Cancer Center which subsequently claimed her life in 1981. Davis married Carla R. Long on January 23, 1990. Davis and Carla enjoyed 35 plus years together, traveling and enjoying life, family and friends. Davis is preceded in death by his parents, first wife Nana, daughter Cathy, sister Marticia Stewart and brother Joseph. He is survived by his wife, Carla, sister, Marilyn Percefull (Ronald Percefull) of Jenks, Oklahoma, grandsons, George Moore Eames of New York and Sam Moore Eames of Durham, CT and son-in-law, George Eames IV of Durham, CT. and many nieces, nephews, cousins and in-laws who respected and loved him. Davis will be fondly remembered by many because of his genuine love for humanity, conversation, debate, laughter and fun. He always said his cancers were caught early and treatment with surgery was successful due to early detection through screening. Special thanks to the staff at M D Anderson Cancer Center who cared for Davis for many years. Thank you to the staff of Southern Touch Home Health, Tammy Taylor and Blessing Okafor of Designed with Loving Care Home Health and Trinity Hospice during the last months of his life. Thank you to his friends and family who shared the good times during his last weeks. In lieu of flowers donations may be made in Davis’ name to the American Cancer Society or to the Alzheimer’s Association. There will be a graveside service in Okmulgee, OK on December 1, 2018 @ 11 a.m. under the care of McClendon-Winters Funeral Home. A Memorial Celebration of Life will be held on 12/29/18 @ 11 a.m. at Northwoods Unitarian Universalist Church in The Woodlands.

Davis Jackson Moore, age 85, died on Wednesday, November 14, 2018 at home with his wife by his side. His last moments were marked by visits from family and friends who adored him. From his birth in Tulsa, Oklahoma on March 9, 1933 to Zelma... View Obituary & Service Information

The family of Davis Jackson Moore created this Life Tributes page to make it easy to share your memories.